MONROVIA, Montserrado – As anti-rape protesters pressured the government to take meaningful measures to control a drastic increase in rape cases, many government supporters are driving the narrative that the protests were politically motivated.

The anti-rape campaign was a three-day protest from August 25 to 27. Although peaceful for much of the duration, protesters occasionally became rowdy when politicians from both the opposition and the ruling party attempted to give speeches during the event. Monrovia’s Mayor Jefferson Koijee, Montserrado’s Sen. Darius Dillon, and Unity Party’s standard-bearer, Joseph Boakai, were all prevented from taking any major role when they marched with the protesters.

On the third day of the protest, things drastically took a turn for the worse, as police attempted to prevent the protesters from gathering at Vamoma Junction, at the edge of Sinkor, where they had gathered the two previous days. Police sprayed tear gas at protesters and chased after them. Videos and photos shared on social media showed police apprehending protesters in ways that appeared excessively violent.

Facia Harris, one of the protesters, said she was assaulted by the police, but refused to be silenced. No amount of assault could stop the protesters from accomplishing their mission, she said.

“The pain I felt this morning from the Liberia National Police is not compared to the one the women and girls go through – that’s painful and un-consented rape,” she said.

“I don’t want to dwell on the assault of the police because there are deeper pains that the women and girls of Liberia are feeling.”

Maima Robinson, who heads the Women Against Female Genital Mutilation group, expressed disappointment in the country’s leadership for allowing the police to attack peaceful citizens for campaigning against rape.

“Maybe, they are perpetrators, that’s why they did what they did to us,” she said.

“About five to six months of our lives have gone to waste due to Coronavirus and all we see is our women and girls raped, and our government cannot even stand by us.”

She vowed, “As long as rape continues to happen, we will continue to take to the street.”

In response to the attacks on protesters, Nobel Laureate Leymah Gbowee wrote on her Facebook page, “I woke up this morning to news of the government of Liberia clamping down on the peaceful protest organized by young people against the pervasive rape culture in Liberia. This is sick, appalling, and a big shame on the Weah-led administration.”

“To teargas and use violence on a peaceful gathering led by women against a pandemic is beyond unimaginable. I call out Minister Piso Saydee Tarr. Shame on you! Your job demands that you protect the most vulnerable population of Liberia, but you have chosen to align with your political Godfather.”

“It is important to note that the groups did not obtain permits from the Ministry of Justice, but they were allowed to go on since their actions were in the best interest of the overall population in the fight against rape and sexual gender-based violence,” the police statement said.

A fiery opinion piece that was published on the Executive Mansion’s Facebook page by the Mansion’s director of public affairs took a strong stance against the anti-rape campaigners, claiming that they had a political agenda and were “not interested in the substantive issues that underpin and fuels the rising tide of rape and other violent crimes against women and girls.”

The opinion piece offered no proof of the protest being supported by any opposition political group. After a wave of overwhelmingly negative comments criticized the use of the Executive Mansion’s platform for such a partisan message, the post was later taken down but it has been published by The Bush Chicken.

Despite the apparent attack by the police on Thursday, some protesters later made their way to the U.S. Embassy to present a petition. A larger group gathered at Fish Market, opposite the home of former president Ellen Johnson Sirleaf, where groups of women usually gather to pray or protest.

Telia Urey, a former opposition representative candidate in Montserrado, was present. She told the press she joined to protest to stand in solidarity with women and children being rape. She called on the government, families, and communities to take stronger stances against rape.

“We are all unprotected, young or old; we are all in the same situation,” she said. “It could be somebody today and it could also be you tomorrow, your sister, or brother.”

Urey also called for a harsher penalty for perpetrators of rapes.

Another campaigner was Evelyn K. Seagbe, a journalist who dropped her microphone to join the anti-rape campaign. She railed against some of the justifications men use for rapes.

“Most times, men argue in public that women are rape because of the way they dress, but what about the babies who are helpless,” she said.

One of the protesters’ main point of contention was that they wanted President George Weah to come out to receive their petition. On the first day of the protest, Weah had delegated his gender minister, Williametta Saydee-Tarr, to address the protesters instead of coming out himself. The protesters refused to present their petition to her. Later, they presented their demands to lawmakers at the legislature.

It was likely because of the current president’s absence that there was much jubilation when former president Sirleaf later exited her home to show support for the protesters.

She later tweeted, “To my Liberian sisters peacefully protesting against rape, I stand with you. Women and girls have long suffered in silence, and I support your efforts to bring this issue into the light. It will take an honest reckoning and a collective effort to #EndRapeInLiberia.” 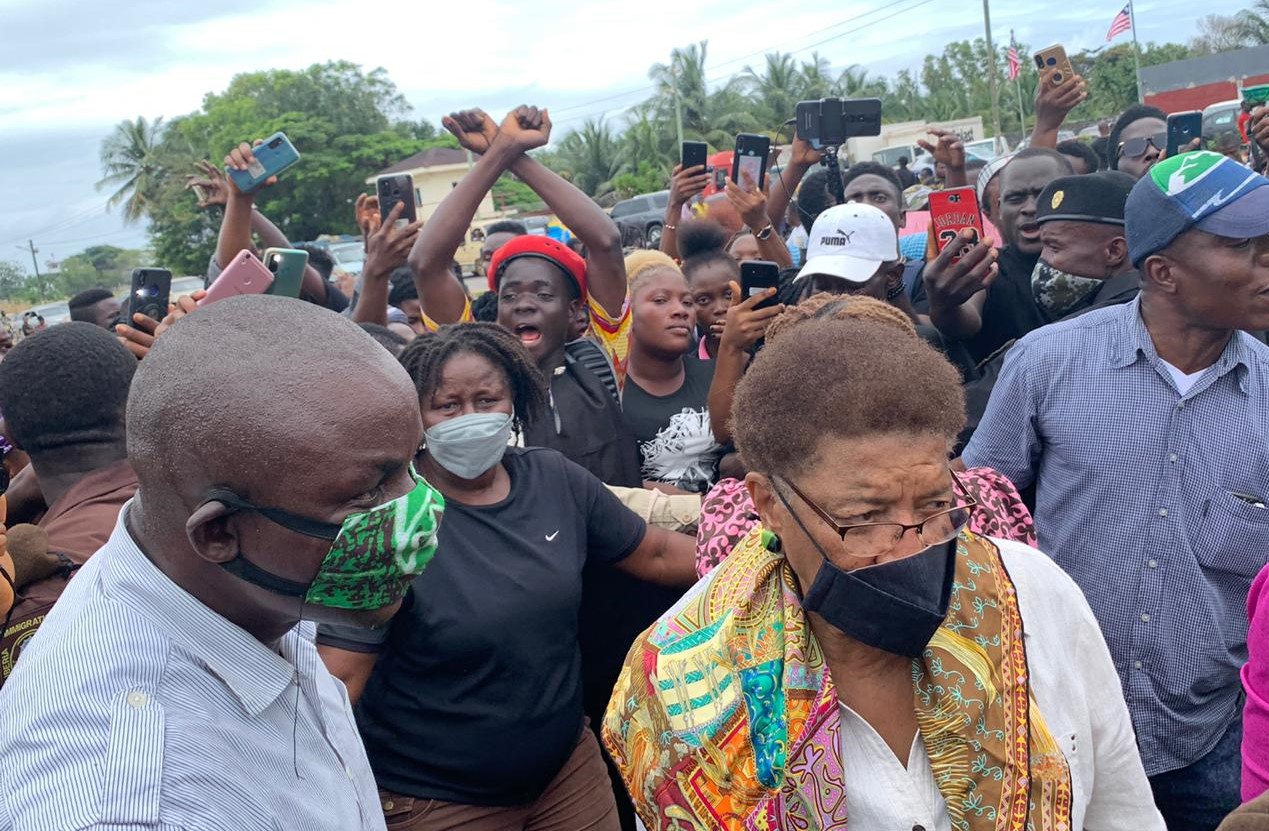 Protesters are calling on the president to declare rape a national emergency. Some points of action demanded by the protesters were posted in a Change.org petition to the president and the legislature.

The protesters gave the president 14 days to form a strategy to address their petitions.

This is not the first time for Liberians have come out in the street in large numbers to protest against sexual and gender-based violence. In 2018, the #WeAreUnprotected campaign demanded an end to injustice and all forms of violence against women and girls. The campaign arose as a response to a damning report ProPublica and TIME Magazine released on October 11 revealing sexual abuse of underage girls and widespread negligence by an educational charity operating in Liberia, More Than Me.

Meanwhile, the president took to ELBC Radio to address the protest on August 27.

He expressed concern over the high number of rape cases and listed steps he had taken several days before the protests began to attempt to resolve the issue. He noted that he had met with key officials, including the finance minister, the justice minister, the gender minister, and the chief justice. After that meeting, he said he ensured that several DNA testing machines were ordered to be brought into the country to ensure that prosecutors can access better evidence in prosecuting rape cases.

He also said he and other officials were examining calls for harsher punishment against rape – including capital punishment.

However, the president expressed concern that there were some protesters who were trying to disrupt the protests, although he did not explicitly accuse them of being politically motivated.

“If you go in the street to talk about rape, you have to be civil,” he said. “I watched live, the television, and those people were insulting the president. Those things are wrong. We’re all talking about rape. Why should someone be insulting the authorities? It’s wrong to do so.”

Asked about his absence at a protest meant to draw attention to a key issue, Weah said his physical absence should not communicate that he does not care about the petitioners’ concerns because he sent his gender minister to interact with them.

“I just want to let them know that I’m with them,” he said. “Because of respect for what they’re doing, I sent my protégé to take the petition, which is right. But I was surprised that they refused to give it to my protégé. What they need to understand is that the government has a representation.”

He continued, “I don’t have to be there. I could be busy and send someone to collect the petition. If I don’t send anyone, then I don’t care about what they’re doing, but of course, you know I care.”

However, Weah cautioned that he did not have all the power when it comes to taking actions against rapes – that other branches of government bear some responsibility.

“At the end of the day, it’s a judicial issue – because you’re talking about penalties,” he said. “A lot of people believe that ‘he’s a dictator’ but I’m always on the side of the law.”