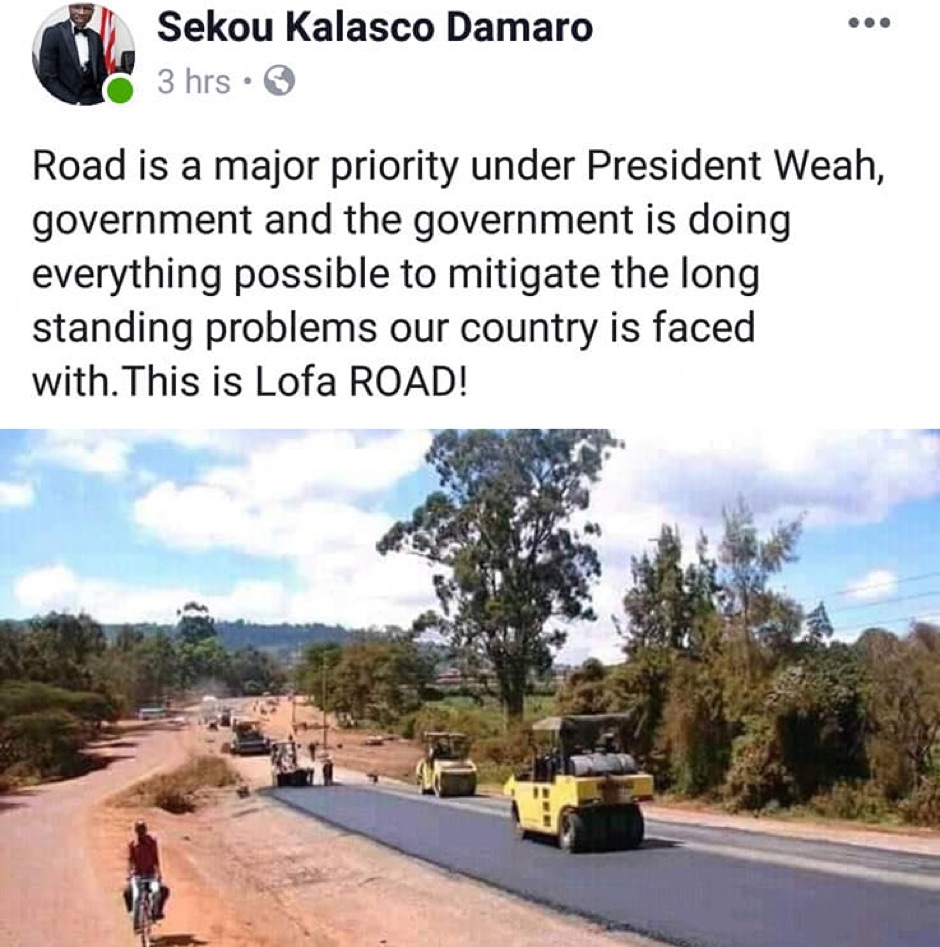 It is Sunday 8th October 2017, Iâ€™m in the city of Sheffield, U.K. attending my nephewâ€™s christening and a Liberian brother asked me for my opinion on a Weah presidency.

My response was, â€œI believe that he will be elected, given the circumstance, but I do not believe he is what Liberia needs right now. However, I pray to be proven wrong â€“ that he, if elected, will work in the interest of the Liberian people. I will be the first to offer my apologies to him for not believing in him.â€

Fast-forward to 2019 and, every time it looks like I am going to be proven wrong and have to apologize, this Coalition for Democratic Change-led government shoots itself in the leg.

When an official of government and an ally of the president attempts to mislead Liberians by uploading pictures to social media depicting roads being constructed in Lofa by the government, when in fact those pictures were downloaded from a news article about a road construction in the Democratic Republic of Congo, that does not help the president in any way but brings his reputation â€“ and that of his government â€“ into disrepute. My advice to the president and his officials would be to stop trying to mislead Liberians and focus on the achievements of this president. Let me give you a few examples.

This president did, in under one year, something that president Sirleaf failed to do in four years. President Weah signed into law on 19 September 2018 the Land Rights Act, which, when completely implemented, would give rural communities title deeds to the land beneath their feet for the first time in our nationâ€™s history. President Weah has overseen the paving of community roads in Doe Community and the link between Congo Town back road and S.D. Cooper road, easing the traffic nightmare of thousands of Liberians who live along the Robertsfield Highway. These are all factual and measurable achievements of this government. These are the things that the presidentâ€™s allies should be focusing on and not conspiring to deceive Liberians by overstating their achievements with untruths.

Now, it is fair that we must give people the benefit of the doubt, but I am a cynic and will only believe someone when I see proof of what they are saying. If the official of government who attempted to mislead Liberians and was caught in the act truly made a mistake, there are a couple of things that I â€“ and I believe most Liberians â€“ would want to see.

First, to upload an image in error means that there was a correct image. So please provide the image that you intended to upload instead of the one of the Congolese road construction. Secondly, he needs to explain how the picture of the Congolese project was downloaded onto his phone without him initiating the download. If the official can do both of these swiftly, then I, and, other cynics could accept that he made a genuine mistake. However, if the official is unable to do so, then it proves my point that this CDC-led government is its own worst enemy.

There are other examples that I can give to support this point. One is the president saying to Liberians and the world on January 22, 2018, â€œWe could not have arrived at this day without our voices being heard loudly, and all our views, no matter how critical, being freely expressed in an atmosphere void of intimidation and arrest. This was only made possible by the tolerance of my predecessor, Her Excellency Ellen Johnson-Sirleaf.â€ Only months later, he then labeled critics of his government as â€˜enemies of the state.â€™ Furthermore, the CDC chairman, Mulbah Morlu, claimed that the reason the president is building new homes now is that it was unsafe to do so under President Sirleaf.

There is also the example of the president while running for the Senate in 2014, releasing his assets publicly without any concerns for the safety of his family or his privacy. However, when asked by a BBC reporter in February 2019 as to why he was refusing to make his assets declaration public, the president claimed that it was for reasons related to his privacy and need to protect his family â€“ another example of doing one thing at one stage and then going in the opposite direction when it suits them.

My advice to the government is to focus on their achievements and stop trying to mislead the Liberian people. It would only lead to more shots in the leg which does not help their case with cynics like me.