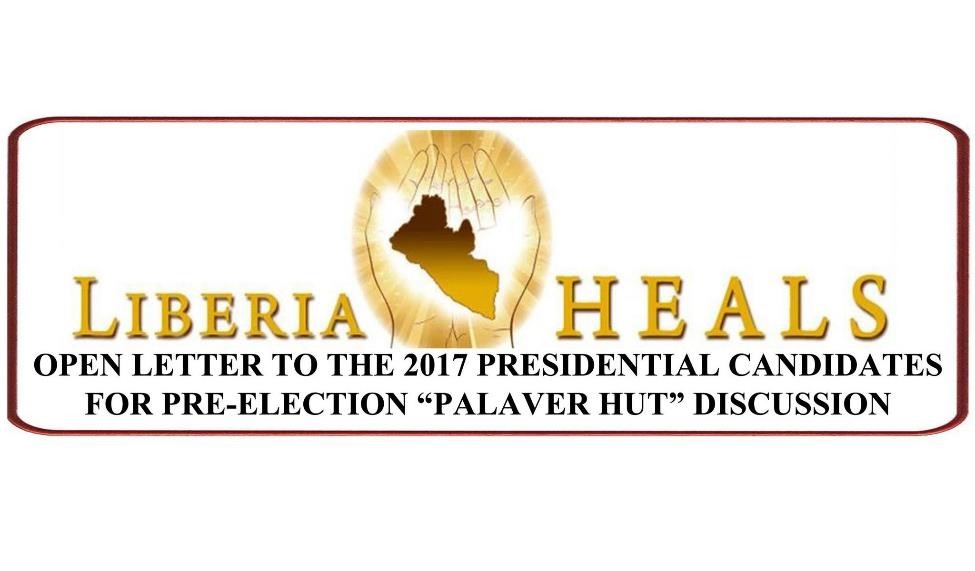 This Open Letter is written to you on behalf of The Liberia Heals Initiative, to inform you of its intention to host a much needed â€œPalaver Hut Discussionâ€ with the presence of all presidential candidates registered with the National Elections Commission in anticipation of the upcoming October 10, 2017 elections.

Most Liberians agree that this will be one of the most important elections in the history of the country. Within the last several decades alone, after overcoming numerous civil disturbances and conflicts, and even a horrific Ebola epidemic in the post-war era, Liberians from all walks of life are eagerly seeking better days and to see Liberia rise to its highest potential.

What better way to demonstrate that we are ready for cooperative nation-building than by witnessing the potential leaders of the country using the traditional palaver hut conflict-resolution â€˜safe-spaceâ€™ environment as a mechanism to share their vision for Liberia?

The purpose of this palaver hut discussion would be to provide the candidates with the unique opportunity to address national reconciliation, along with other important matters of great concern, collectively in the same setting, in front of the Liberian people.

Observing how the current political climate in Liberia is quite tense, Liberia Heals seeks to use its neutral platform as a medium for presidential candidates and political parties to direct their focus on their specific platforms and visions for Liberia.

Through the initiative, candidates will be able to respectfully express their differences, all while promoting peace and stability throughout the remainder of the entire electoral and voting process.Â No matter who wins the election, may peace remain the order of the day!

As evidenced by the signing of the â€œFarmington River Declarationâ€ on June 4, 2017 at the most recent ECOWAS Summit, we are aware that maintaining a smooth transition of power is a high priority for all political parties and the current administration. So again, this event will be an ideal opportunity to echo the important message to the Liberian people thoroughly and firmly.

To the Presidential Candidates

In this public manner, we would like to openly invite the standard bearers of all political parties participating in the 2017 elections to be a part of this very important national dialogue.

The Palaver Hut discussion will tentativelyÂ take placeÂ on August 24, 2017 (Flag Day) at a venue to beÂ laterÂ disclosed in our next open letter.

Your participation in this groundbreaking event is encouraged, and we look forward to a response to this request during the following weeks, as formal official invitations will also be directly forwarded to the offices of your political parties’ headquarters.

Though this Palaver Hut discussion will be hosted live in Liberia with radio broadcasts for the local Liberian audience, it will also be broadcasted live via a live online video feed to encourage participation from Liberians around the world. Â The eyes and ears of all Liberians, both at home and abroad would be watching and listening attentively.

To the Home-Based Liberian Public

For the local Liberian voting public, this is an opportunity for you. We want to give you the chance to hear exactly what those who wish to lead the country have to say.Â  The discussion would be broadcasted live on radio for you to listen to throughout the various counties across the nation with translators as needed.

What is on your mind? What do you all want to know from the candidates before you go to vote? We will be asking the candidates questions on your behalf, and there will even be opportunities to take live calls.

You all are the voting public, and before you go out to the voting stations, it is important you hear the plans the different candidates have to offer so you can make the best choice. If you believe this Palaver Hut discussion is a good idea, please be sure to spread this message so that it becomes a success.

To the Diaspora-Based Liberian Public

To the collective body of Liberians in the Diaspora around the world, Liberia Heals asks for your support in making this endeavor a reality. Though the Palaver Hut discussion will obviously address the immediate concerns of the local home-based Liberian populace, the influence and relevance of Liberians around the world cannot be ignored.

We understand that there are so many Liberians worldwide who desire to be heard and be a part of what is transpiring regarding the upcoming elections. At this discussion, we intend to pose questions to presidential candidates that speak directly to the concerns of the Liberian Diaspora as well.Â  What questions would you like to ask?

A live video feed will be broadcasted to allow Liberians around the world to watch and interact in real-time as the discussion progresses. In order for Liberia to be a great nation, the Liberian Diaspora will surely have to play a critical role. For those who see the value of what is being proposed, we would love to have you assist us in the process.

A Brief Overview of The Liberia Heals Initiative

The Liberia Heals Initiative was founded in 2012 for the delicate task of assisting the Liberian people in reconciliation, healing from the traumas of war, and ultimately bringing forth a new spirit of patriotism and unity among all Liberians, for the sake of moving forward as one.

Comprised of concerned Liberians from both the local home-based scene, as well as those in the diaspora, the vision bearers of the Liberia Heals Initiative observed how the lack of a consistent national healing mechanism in the post-war era was giving way for unsolved rifts to linger and hurtful wounds to fester. Since this launching, the initiative has hosted countless events, healing concerts, psycho-social healing workshops with vulnerable groups, and provided humanitarian services both in Liberia and in the U.S.

Anyone interested in being a part of this experience can send all inquiries to info@LiberiaHeals.org. More information is available on our website, Facebook, and on YouTube. Thank you. In union strong, success is sure!

With Best Regards and Great Faith,