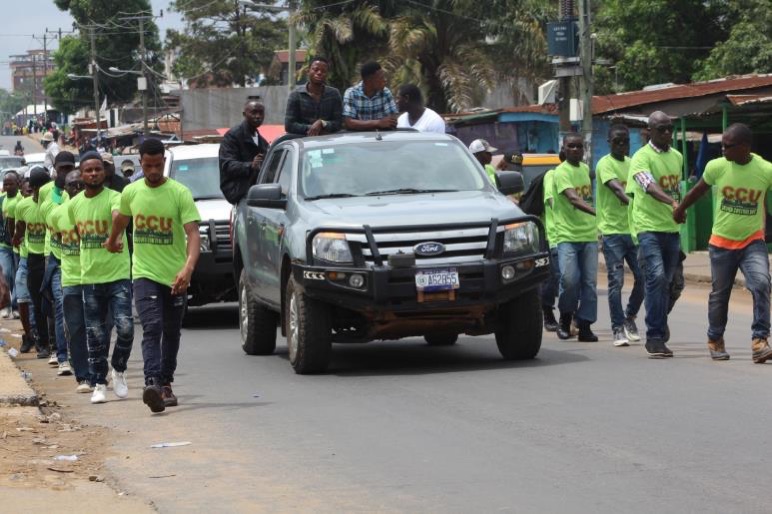 MONROVIA, Montserrado â€“ Members of the Council of Patriots, the organizers of the protest originally scheduled for December 30, say they will go ahead with the kick-off of their protest today, Monday January 6.

The protest was earlier branded as a â€˜Weah Step Downâ€™ campaign, aiming to demand the unconditional resignation of the president. But the group has clarified that, for fear of national security threats, the protest is a peaceful assembly of citizens to demand that the president â€˜step upâ€™ his leadership. The Council of Patriots has not said when the protest will end.

Its chairman, Henry Costa, told journalists after an intervention meeting with the Inter-Religious Council that the protest will go ahead today and will not stop until actions are taken by the government to address a list of demands presented during an earlier June 7, 2019 protest. Costa said the protesters will call off their action only if some of the demands are met by the government.

â€œWe are talking about the US$25 million report, which we know has been completed. But you know itâ€™s damaging, but the government has refused to publish [it] because it is damaging, and we want prosecution. We want a further investigation into the infusion of the L$16 billion into the economy,â€ he said.

â€œWe know that Mr. [Milton] Weeks and Mr. [Charles] Sirleaf are being prosecuted for the L$1.9 billion unauthorized printing, right, but not for the L$16 billion â€“ how it was infused. We also want the president to publish his assets â€“ the inexplicable overnight acquisition of wealth, we want to know. Weâ€™re curious.â€

He said the Council of Patriots is also demanding the issuance of a broadcast license to Punch FM and immediate reopening of Roots FM.

During its previous protest on June 7 and up to the time of the rescheduled December 30 protest, the group had been supported by major opposition political parties. But Unity Partyâ€™s chairman, Wilmot Paye, announced during a press conference on Sunday, January 5, that although the protesters had scaled down the intent from the original goal of calling on the president to step down, the protest could still result in violence. Paye urged Unity Party supporters to stay away from the streets during the protest today.

â€œWe want to urge all our supporters and sympathizers, friends and citizens of Liberia to be cautious about Monday, January 6, 2020 and not allow our party to be drawn to any standoff that could have dire and adverse consequences. The most prudent thing to do, therefore, is to avoid the streets and monitor unfolding events from our homes,â€ he said.

â€œWhat you did on December 30, 2019, by staying home was a protest all by itself. Please let us not give George Weah and his [Coalition for Democratic Change] any excuse since they are already failing. Let them fail on their own terms and conditions.â€

However, the partyâ€™s assistant secretary-general for press, publicity, and outreach, Mohammed Ali, who is also the Council of Patriotsâ€™ secretary, issued a statement criticizing his party chairâ€™s position.

Ali said the entire executive committee of the Unity Party still supports any peaceful gathering of any group of Liberians as provided for by the Constitution of Liberia, as declared by its standard-bearer, former vice president Joseph Boakai.

Liberty Partyâ€™s political leader, Nyonblee Karnga-Lawrence, had also reportedly disassociated herself from a statement issued by the partyâ€™s deputy secretary, Edward Kla-Toomey, on the partyâ€™s support to the protest.

On Monday, December 30, 2019, the Council of Patriots announced a shift in the protest date to early January based on a request from key diplomatic missions in Liberia, including the U.N. and the ambassadors of the United States, European Union, and ECOWAS.

Costa disclosed during a press conference that the diplomats revealed that the government had informed them of its lack of manpower to provide protesters and counter-protesters security and protection. But the foreign diplomats insisted that the governmentâ€™s position to defer the requests to the need of January was far, and proposed that protesters be allowed to stage their peaceful assembly on Sunday, January 5, 2020.

In a joint statement issued late on December 29, the diplomats strongly encouraged the demonstration to be held on Sunday, January 5, 2020 at the Antoinette Tubman Stadium. The statement also encouraged counter-protesters to shift their actions to January 12 at the same venue. The adjustments were also contained in a statement issued by the Ministry of Justice.

However, Costa refused to gather on a Sunday, a day of worship for Christians, or to be forced into a stadium. He insisted that the protest would be held today, January 6.

Early this morning, security forces began setting up checkpoints across town to prevent the flow of traffic beginning in Sinkor and leading up to Capitol Hill, where the protesters are expected to gather. Protesters have started trickling in, although it is still too early to tell how many will eventually arrive.

Sharing
Tags Council of Patriots, Henry Costa
Contributions to The Bush Chicken are not tax deductible.