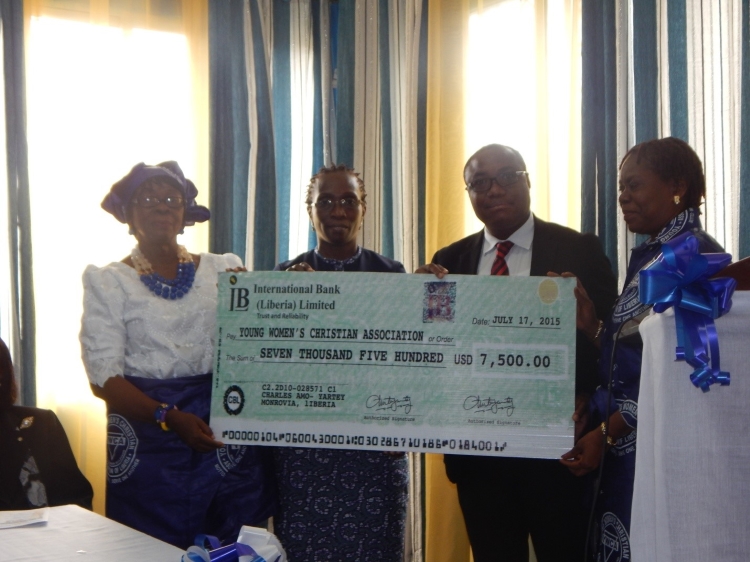 MONROVIA, Montserrado – The Young Women Christian Association of Liberia has received a US$7,500 donation from the International Monetary Fund.

IMFâ€™s Resident Representative in Liberia, Charles Amo-Yartey, made the presentation of the check to officials of YWCA Liberia on Friday at the head office of YWCA in the Monrovia neighborhood of Congo Town.

YWCA is a non-profit organization that serves women and girls by engaging in, among other things, leadership training, gender advocacy, youth development, and skills training. The presentation was made on behalf of IMF Managing Director Christine Lagarde, who was due to deliver the check personally, but her visit to Liberia did not materialize.

Amo-Yartey said Lagarde could not come to Liberia due to other pressing commitments.

Amo-Yartey said the fund was part of the IMFâ€™s support to YWCA humanitarian programs in Liberia.Â He said the IMF has a civic program that supports charitable activities across the globe.

â€œWe will be happy if you [YWCA] can keep us posted with your activities,” Amo-Yartey said. “I will like to take this opportunity to wish YWCA Liberia all the best in your humanitarian and community development efforts.”

In a letter addressed to the YWCA, Lagarde said it was regrettable that she could not come to Liberia but said the IMF is greatly interested in learning about the progress of the YWCA projects.

â€œPlease send us a report on your activities and the outcome of this donation,” she said. “I wish you and your team at the YWCA all the best in your humanitarian endeavors. I really hope to come and visit in the not too distant future.” The National General Secretary of the YWCA, Roseline K. TowehÂ thanked the IMF for the donation, describing the visit of the IMFâ€™s Resident Representative as a “milestone and a greater achievement of the YWCA.”