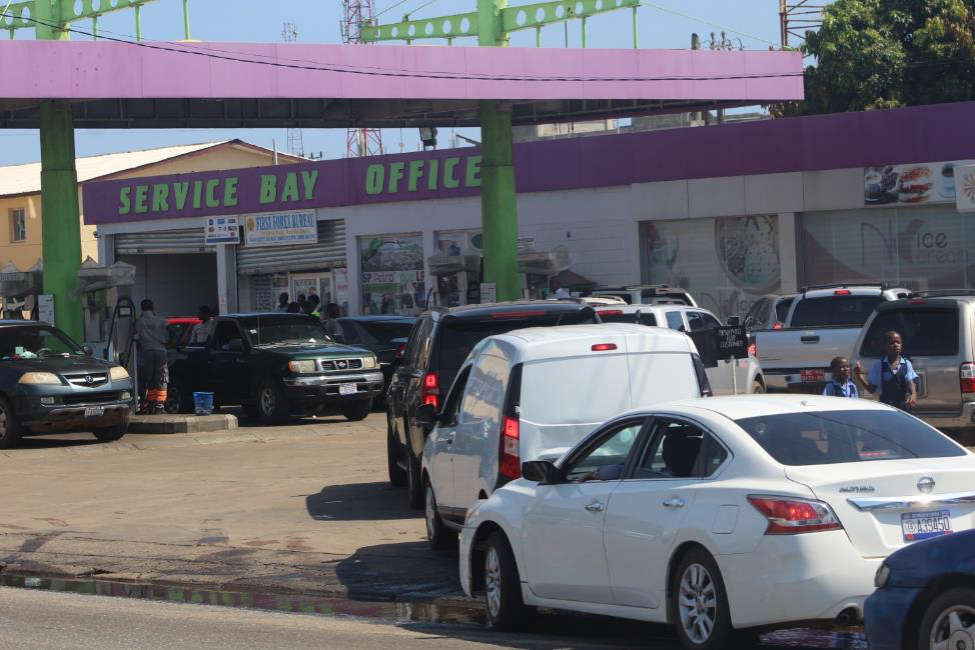 MONROVIA, Montserrado â€“ Across Monrovia, the gas stations of major distributors of petroleum products have been shut down, with signs placed at the fueling stations noting that the stations are out of the key commodity.

Stations affected by this phenomenon are operated by Total, Aminata, and NP. Don Kan, Kailando, Super Petroleum, and other smaller filling stations appeared to be in full operation on Monday, October 22. News about the alleged shortage of gasoline started to gain steam on social media beginning on Sunday, October 21. On Monday, a Total filling station displayed a sign that it was out of gas. Photo: Zeze Ballah

At the shuttered gas stations, employees were often unaware of the reason for the lack of gasoline.

On Sunday, the 5th Street Sinkor Total station had no gas.

â€œI was only informed by the management on Monday, October 22 that there is no gasoline,â€ said one Total gas station employee, who spoke anonymously because they were not authorized to speak to the press.

According to the employee, a few other Total filling stations were serving customers, however.

â€œI do not know the exact time the management will supply gasoline,â€ the employee added.

Attempts to reach individuals at Totalâ€™s headquarters to comment on the issue failed.

At the Liberia Petroleum Refinery Corporation, the government agency responsible for supplying the market with petroleum products, Bill Morris, the public relations director, did not respond to The Bush Chickenâ€™s inquiries. Nor were there any press releases or any other messages addressing the current crisis on any of the public corporationâ€™s online platforms.

Speaking on Prime FM on Monday, Emmanuel Tokpa, the chief executive officer of Aminata & Sons, clarified that the issue was not due to a shortage of petroleum in the country.

â€œNo one should tell the Liberian people that petroleum is not in the country,â€ he said.

â€œImporters are losing on all of the petroleum products because they cannot meet up with their financial obligation with various commercial banks,â€ he said.

Except for Total, Tokpa said all of the stocks in the country are controlled by collateral management, which means that suppliers have millions of U.S. dollarsâ€™ worth of products, but they cannot access them until the products are paid for.

He said the petroleum products are being stored in tanks at LPRCâ€™s and other private storage facilities. However, Tokpa contends that the price of gas on the market is not high enough to be able to pay for those products and sustain their operations.

According to the Aminata & Sons chief executive officer, his company lost over US$1 million between July and October 2018 and he said: â€œthe various petroleum companies are struggling to invest in the economy.â€

Tokpa said his company was constructing a filling station in Ganta and had to stop because the company lacked funding to purchase petroleum products.

He put the construction cost of one of the companyâ€™s filling station at US$500,000, including the purchasing of land.

â€œIf this situation is not settled, there is a possible threat on the bank sector,â€ Tokpa said. The gas crisis comes amid a joint letter signed by the heads of major petroleum retailers addressed to Finance Minister Samuel Tweah on October 12, 2018.

In the letter, the seven executives drew attention to three major issues. They said the 2016 Road Fund Act that had permitted the institution of a US$0.30 per gallon gas tax was burdensome because the Liberia Revenue Authority was attempting to collect taxes retroactively.

Additionally, they said the governmentâ€™s reduction of the price of petroleum products for the first six months of the year took away 95 percent of their margins.

Further, the companies said the fluctuation of the exchange rate, coupled with government agenciesâ€™ refusal to accept all payments in the local currency, was creating a significant financial disincentive for operating their businesses. Moreover, the petroleum retailers said the official fuel prices published by the Ministry of Commerce and Industry often used a different exchange rate than the official rate published by the Central Bank of Liberia, which often differed by L$10, a disadvantage to the retailers.

â€œCreating bottlenecks for us will have enormous negative effects on the overall performance of the Liberian market,â€ the letter read.

It was signed by the heads of Total, Petro Trade, Aminata, NP, Kailondo, Westoil, and the Monrovia Oil Trading Corporation.

Industry insiders who declined to speak on the record have speculated that the retailers are using this artificial shortage of petroleum products on the market to incentivize the government to quickly address their concerns.

Some taxi drivers who spoke to The Bush Chicken said they had seen the price of gas increase since Saturday when it was L$540 per gallon to as high as L$630 from retailers that were open.

The few stations opened had long queues of vehicles.