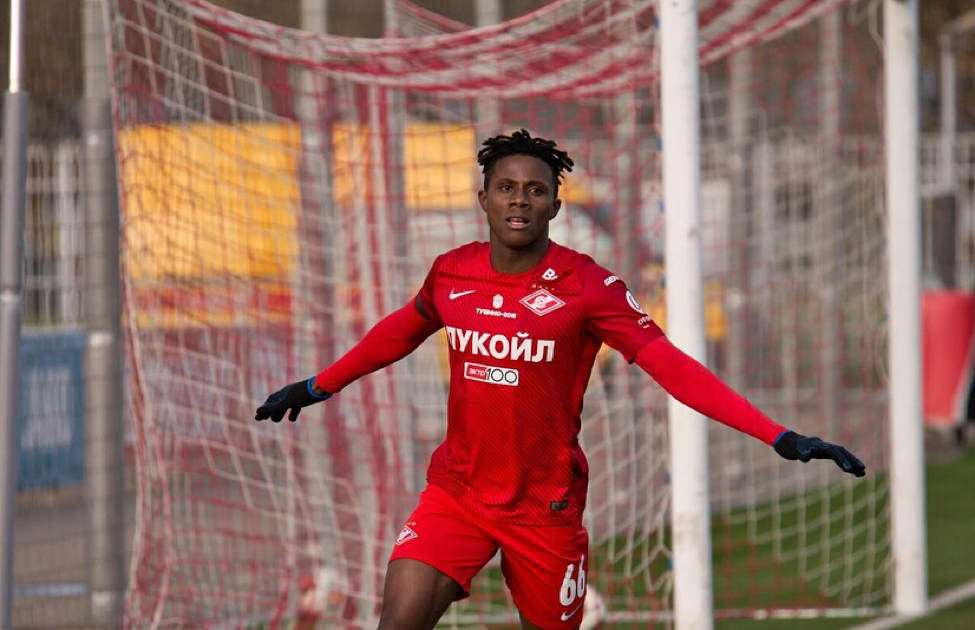 It was a joyful weekend for the former Monrovia Club Breweries youngster, Sylvanus Nimely, who scored his third league goal of the 2016-17 Russian National Football League for Spartak Moscow II.

The Liberian international hit the net for the third time in the league to help Spartak Moscow II to a comfortable 3-1 victory at home over FC Tyumen.

Nimely opened the scoring for Spartak in the 27th minute before 19-year-old Russian forward Aleksandir Lomovitski doubled the lead in the 36th minute. Despite having some golden opportunity, Tyumen failed to pull a goal back before the sound of the first half whistle as Spartak went to the break with a 2-0 lead.

Down with two goals, Tyumen returned from the break with the hopes of getting an early goal to reduce the score and fight for an equalizer before the end of the match. However, they could not score against their host until they conceded their third goal in the 73rd minute.

Zambiaâ€™s U-20 striker, Junior Fashion Sakala, added the third goal for Spartak Moscow who became the clear favorite, walking away with the full three points.

Two minutes to end the 90 minutes of play, Tyumen got a consolation goal. Veteran Russian midfielder Vladimir Leshonok scored to help the visitors register their name on the scoresheet.

Spartak moved up to eighth on the league table with 30 points from 19 games while Nimely registered his third goal from 13 appearances. Â He opened his scoring account in Spartak Moscowâ€™s 3-1 win away at Volgar Astrakhan before scoring his second two matches later to help Spartak secure a 2-2 away at FK Dinamo Sankt-Peterburg.

Before the start of the 2016-17 league season, Nimely was registered with Spartak Moscowâ€™s first team in the Russian Premier League, but has failed to break his way through the first team that includes Shakhtar Donetsk, Luiz Adriano, Quincy Promes, and Pedro Neves in their list of forwards.

His lack of opportunity in the senior team has forced him to play for the junior team, a decision Nimely feels is the best for his career as a young player. He told The Bush Chicken that he does not feel discouraged, but he is rather happy to learn from some of the worldâ€™s best players.

â€œIt was the best decision for me to come here while Iâ€™m with the senior team,â€ he said. â€œI donâ€™t see it as a disappointment that Iâ€™m not playing in the first team. Iâ€™m grateful to God to be in such a great club. Iâ€™m learning a lot from the top players in training. Iâ€™ll continue to work harder until my time for the senior team comes.â€

Nimely will lead Spartak Moscow IIâ€™s attack this weekend when they travel away to third-placed FK Ourengburg.