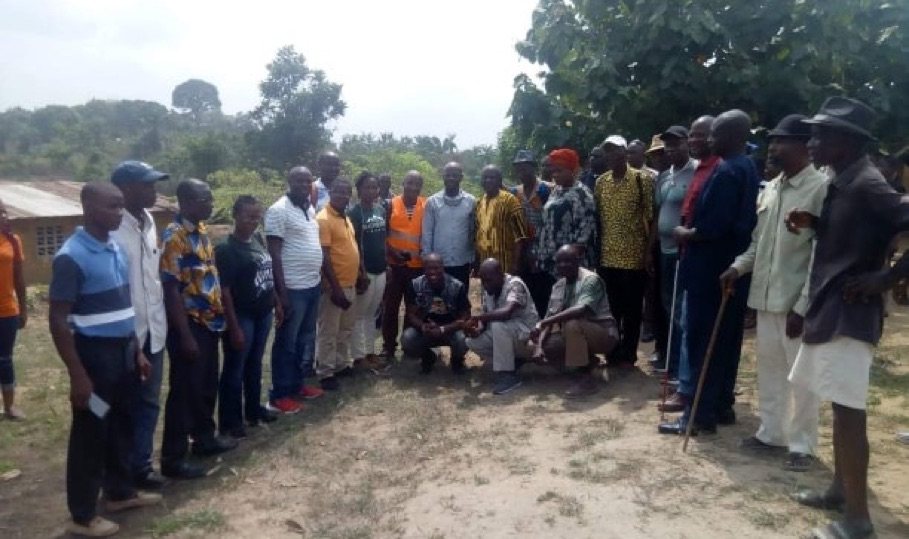 BUCHANAN, Grand Bassa â€“ The Ministry of Health, in collaboration with authorities of Grand Bassa, has launched a Lassa Fever awareness in the countyâ€™s fourth district. Lassa Fever is a deadly disease caused by eating food, drinking water, or touching household items already contaminated by feces or urine of infected rodents.

The awareness program intends to sensitize residents of the district in how to prevent the disease. It was launched over the weekend in Gaye Peter Town, Wayzohn, in the presence of county authorities, representatives from the Ministry of Health, the National Public Health Institute of Liberia, the U.S. Centers for Disease Control and Prevention, and the World Health Organization.

Authorities from the Liberian Agricultural Company Health Center were also present, as the team plans to extend its sensitization and awareness campaign to several camps within LACâ€™s plantation where a large number of suspected Lassa Fever cases have been discovered.

Presenting an overview of the outbreak in the county, the surveillance officer of Grand Bassa, Gabriel Cassay, disclosed that from Jan. 2019 to present, there have been some 71 suspected cases. Of the 71 suspected cases, 25 have been confirmed infected. And of the 25 confirmed cases, 4 persons have died, while the rest continue to be monitored. Only a handful have been released back into their communities.

But Cassay cautioned citizens to avoid eating rats in their communities as one way of curbing the spread of the disease. Another way of preventing the disease, he said, is to keep their homes and surroundings clean, properly dispose of garbage, cover food and drinking water at home, continuously wash their hands, and only eat from clean utensils.

He added, â€œLassa fever is a bad sickness which is among us here in Liberia and has affected many people and killed some. Anyone who eats or drinks contaminated food or drinks can get the disease. It can be spread through contact with people who are sick with the disease or their fluids.â€

Once infected, it would take some 2 to 21 days for a patient to begin to experience any signs and symptoms of the disease. Gladly, the disease can be treated and cured once symptoms are reported early.

Also speaking at the program was the superintendent of Grand Bassa County, Janjay Baikpeh, who also added a word of caution for residents and citizens of district four and the entire county to avoid eating rats and to clean their surroundings as a means of guiding against contracting the disease.

â€œStop eating rats, whether from the town or from the bush, we beg you please,â€ he said. â€œWe need to stop eating rats or stop living with rats in our homes. Only rats can give you Lassa fever, so clean your towns, villages and your surroundings to be free from Lassa fever.â€

He urged all statutory superintendents, mayors, commissioners, and paramount, clan, and town chiefs to ensure that their cities, towns, and villages are regularly cleaned to prevent the spread of the disease across the county. He also emphasized the need for continuous washing of hands, and to report or encourage anyone with symptoms of the disease, to report themselves and seek medical attention.

The chairman of the Superintendentsâ€™ Council of Liberia also called for stronger collaboration between the political and health authorities of the fifteen counties to combat the deadly disease.

He noted, â€œWe also understand that there are suspected cases from other counties. We have to cooperate with health authorities; we need to listen to them. This is serious; we need to work together as citizens. All of the counties share common borders, donâ€™t say it is not your county; it is also easier to spread to your county as well.â€

Also speaking at the event was the mayor of Wayzohn, Edwin Weljay. Weljah encouraged health authorities to put into place preventive measures to stop the disease from spreading to other cities, villages, and towns in the county.

â€œWe are good at discovering, but not good as finding solution,â€ Weljay said. â€œYou are saying people in other towns are infected, but what are you doing to prevent others from getting the disease? We want this place to be zero tolerant of Lassa fever.â€

He further said, â€œTo the citizens, we need to do everything possible to clean our environment. Let us stop eating a rat in our towns, villages, and communities so as to stop the disease from catching us.â€

Weljay also called on the national government, NGOs, humanitarians, and international partners to assist the county with sanitation items such as shovels, wheelbarrows, gloves, hoes and other materials to enable them clean their communities.

A resident of Gaye Peter Town, Nanu Peter, encouraged health authorities to amplify their awareness campaign throughout the county, especially in reducing stigma.

â€œIf a person is diagnosed of Lassa fever and taken from a community and that person is treated, the health people should escort that person back to the community and inform the community dwellers that he or she is well to avoid confusion,â€ Peter noted. â€œA person was taken from here by health authorities and returned without any information from health authorities. So, we told them to stay across until we hear from the health people. It brought serious noise; therefore, we are appealing to them to give the person paper so that we can know that he or she is well.â€

At the end of the event, it was clear to all what was at stake â€“ the very health of the county in the face of a deadly disease. The authorities agreed that the Liberian Agricultural Company Health Center would certificate all persons who have been successfully treated and cured as a requirement for their reentry into the community.

Sharing
Tags Ministry of Health
Contributions to The Bush Chicken are not tax deductible.