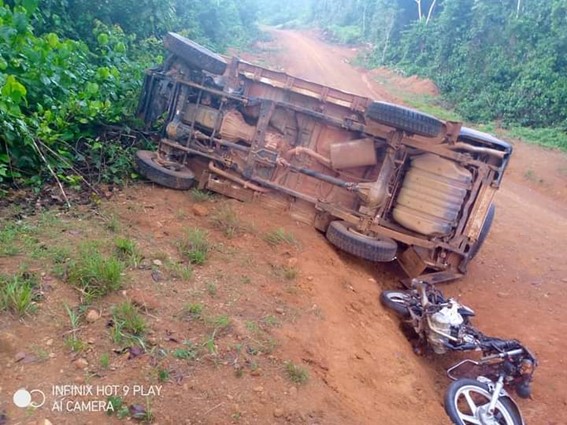 DORROBO, Maryland – An accident involving a commercial motorcycle and a pickup truck belonging to Catholic aid group Caritas has resulted in the death of two persons.

Both the driver and the passenger of the commercial motorcyclist died. The 63-year-old Joe Kuoh, a teacher at the Sawtoken Number Two Public School, had hired the bike on his way back from Pleebo to collect his salary from the bank. Health authorities who pronounced Kuoh dead said he had sustained a deep cut on his head, in addition to breaking his legs.

The driver of the motorcycle, Patrick Gekor, also had a broken leg in addition to other wounds. Gekor died days after the April 29 accident, on May 1, at the J.J. Dossen Memorial Referral Hospital.

Eyewitnesses told reporters that the pickup truck driver had initially fled the scene for fear of being harmed by angry residents. He had been returning from distributing food to towns in Barrobo District.

Speaking in an interview with The Bush Chicken, the Liberia National Police’s chief of traffic in Maryland, Oscar Collins, identified the driver as Boye Blade. He has since been arrested and is awaiting trial. Collins said the pickup had 14 occupants, but no casualty was reported even though the truck had somersaulted.

“Motorcyclists and drivers, as well as pedestrians, should be careful in using the road to save their lives and that of others,” Collins said. 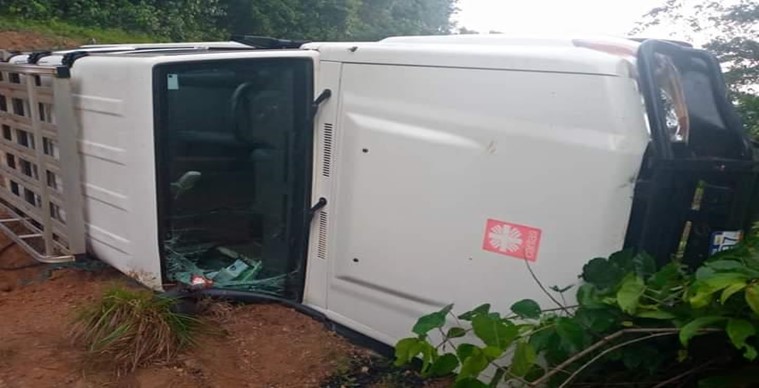 The motorcycle’s passenger, Kuoh, was also a pastor of the First Assembly of God Church in Maryland’s third electoral district. Ben Kuoh described his father’s death as a blow to the family and the entire Barrobo District.

“I can’t just get over this because it is painful – my father told us that he was coming to collect money for the family and only to hear that he was in a tragic accident that has taken his life, leaving me fatherless,” he said.

He added that his father’s death now threw his future education in doubt, as he planned to travel to Pleebo or Harper the upcoming academic year to pursue a secondary education through his father’s sponsorship.

This is the second fatal motorcycle accident reported in Maryland within less than two months. On March 10, a local radio station reporter was involved in an accident that resulted in his death two days later.