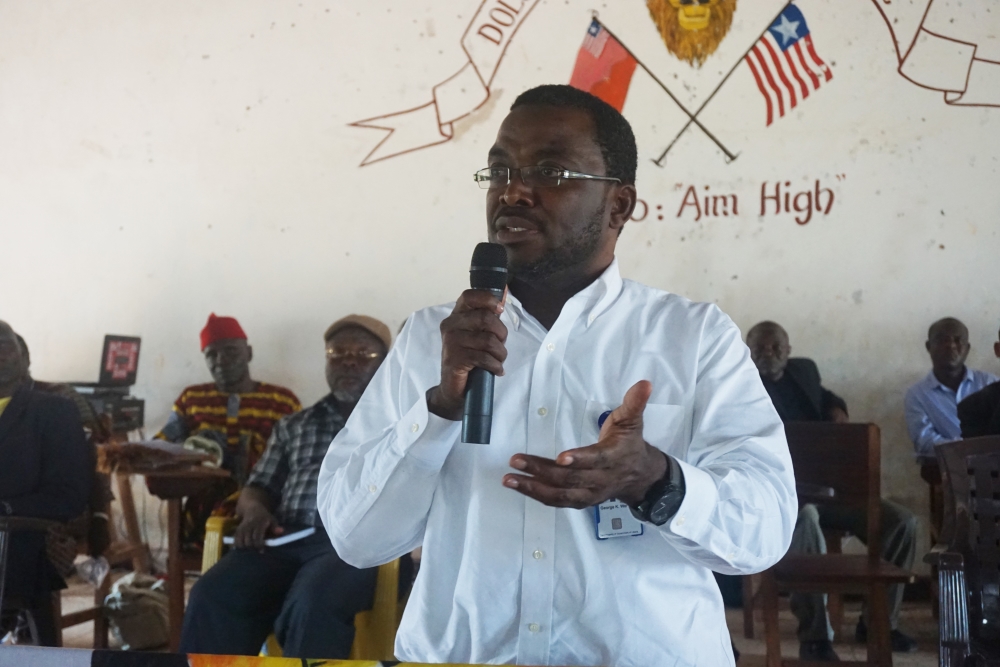 Werner said the meeting was part of a series of routine visits he has been conducting to the various counties to assess local educational infrastructure. However, for Bong residents, the meeting served as a forum to vent their frustrations with the education system in addition to addressing a recent confusion with regards to the appointment of Bongâ€™s County Education Officer.

In July, Sam Bondo was appointed CEO for Bong before being replaced less than a month into his tenure with Edward Kpulun, a former Assistant Professor at the University of Liberia who previously served as a representative for Lofa. Subsequently, Bondo was assigned as CEO of River Cess, a position he currently holds. Some audience members and education leaders were visibly upset at the replacement of a â€œpermanent son of the countyâ€ with Kpulun. In attendance was the head of the Bong County Motorcyclist Union who said, â€œThe Minister of Education has disgraced the citizens of Bong county.â€ At another point, a reporter for a community radio station asked Werner to clarify a rumor about three legislators visiting him to give him an ultimatum to reinstate Bondo.

In addition to their frustration over the replacement of a local â€œson,â€ stakeholders said the issue had created a void in the educational leadership in the county. Hanson Belekabolu, president of Gboveh High Schoolâ€™s student body, said having a void in the CEO position made it difficult to get someone to address their concerns. Addressing the group, the minister took responsibility for the confusion but explained that the problem was caused by subversive behavior by individuals within his Human Resources department. Werner said while he was away on a trip, individuals within the HR department appointed two CEOs, a decision that should not have been made without his signature. â€œAt the level of CEO, DEO (District Education Officer), HR cannot issue a letter of employment without the consent of the Minister of Education,â€ he said. When he found out about the decision, he rescinded the appointments.

Werner said he decided to assign Bondo to River Cess because he knew him to be a competent and accomplished individual who would be well-suited for the challenge of River Cess, which only has one high school that performs worse than schools in Bong.

Bondo himself said he had â€œaccepted to go to River Cess, respecting my boss.â€ He said, â€œEducation cannot be achieved in a hostile environmentâ€ and asked citizens, students, and parents to let the issue rest. â€œPlease, let it be,â€ Bondo pleaded before introducing the Kpulun as the new CEO. Both men stood next to each other, shaking hands and smiling for the cameras. Kpulun thanked the people of Bong â€œfor accepting me as a nephewâ€ and promised that â€œbusiness as usual is out of the way.â€ He promised to hold the DEOs under him accountable and ensured that they would visit all schools under their control.

He said nine schools in Bong are already being renovated and he would make a special appeal to the minister to have the Gboveh High School renovated also. This was in reference to a request by the student body president, Belekabolu.

Belekabolu told the minister that the Gboveh High School had significant challenges. â€œThis campus lacks safe drinking water and latrine,â€ he said. He also appealed for learning facilities. â€œHow can you learn when you donâ€™t have a library or laboratory?â€

The minister promised that safe drinking water would come â€œIf not this year, then next year,â€ he said. He emphasized that the issue of sanitation was very important to him, not just because of the recent Ebola outbreak but also because of its impact on girlsâ€™ education.

â€œBathrooms are important because we want our girls to come to school and stay in school,â€ Werner said. He added that at the primary level, the gender ratio was almost equal but that changed greatly in favor of boys in higher grades. He also said he was not pleased that only 28% of teachers are females and most of them are at the primary level. Speaking on his larger plan for Liberiaâ€™s education system, Werner said his early closure of schools was meant to shock the nation. When asked whether he was concerned that Liberian students were already three to six years older than the average sub-Saharan African student of the same grade, Werner asked what good it was to have students in a grade that was appropriate for their age when they had not learned anything.

He said instead of the oft-used slogan, â€œfrom mess to best,â€ he wanted to start using â€œgetting to bestâ€ to reflect that Liberians were continuously building on gains already made in the education sector.

He said one of his biggest challenges has been getting adequate funding. Because of the constraints within the national budget, Werner said he will seek donorsâ€™ help. He plans to take a trip with strategic donors to the counties soon in order to allow them to see the reality on theÂ ground. His hope is that it spurs them to greater action. A flyer for the biometric system intended to weed out “ghost” employees. Photo: Jefferson Krua

In his address to the citizens of Bong, the minister also introduced the new biometric system that the ministry was now using to ensure that the payroll was cleaned. Werner said the Ministry had completed Montserrado last week and â€œover a thousand teachers didnâ€™t show up.â€ He continued, â€œIn my mind, they are ghosts.â€ Werner has previously stated that he aims to see the biometric system implemented in Bong, Lofa, and Nimba counties by the end of December 2015.