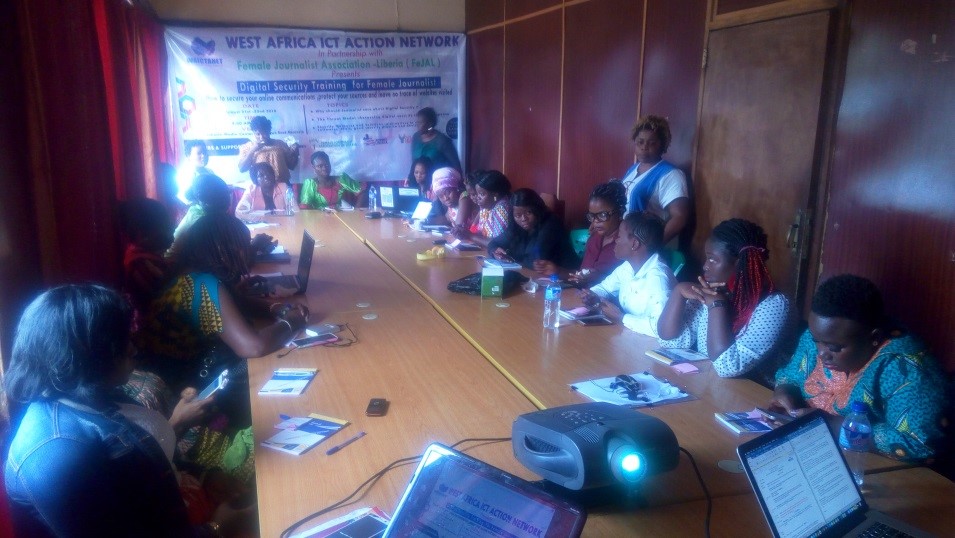 MONROVIA, Montserrado â€“ The Female Journalists Association of Liberia, in partnership with the West Africa ICT Action Network, has concluded training on digital security for 25 female journalists in Monrovia.

The training started on Tuesday and ended on Thursday, August 22, 2018, at the Liberia Media Center in Sinkor. The media practitioners who participated in the training were taught about device security, information security for investigative journalists, and fundamentals such as designing a secure password.

During the closing of the training, PeterKing Quaye, the executive director of the West Africa ICT Action Network, said the main role of the workshop was to ensure the journalists were more security minded in a digital age, especially given the many threats female journalists face online.

â€œThere is a strong need to empower Liberians, especially the females, with digital skills,â€ Quaye said. â€œThis will ensure improvement in their work.â€

Quaye noted that his organization looks forward to further partnership in building the technical capacity of journalists in digital security for increased awareness.

â€œWe are excited that about this partnership with FeJAL and look forward to doing this in many parts of the country. We expect that you will all leave here as messengers for digital security,â€ he noted.

At the same time, the coordinator of the FeJAL, Siatta Scott Johnson, said female journalists are struggling to compete with their male counterparts in the media landscape due to limited knowledge on information communication and technology.

She maintained that female journalists have been denied major positions in their respective newsrooms due to either little or no knowledge on information technology.

Johnson encouraged the 25 participants at the training to utilize the skills they learned. According to her, before the training, most of the participants had no knowledge on ICT security but noted that the two days have built their capacity in digital security and they now know how to distinguish between fake and real accounts and phishing attacks, where attackers send dubious links via email to lure their targets into giving up useful information.

â€œWe at FeJAL are very excited about this skillsÂ given [to] our members and expect them [members] to use what they learned to secure their information,â€ she said.

Johnson then thanked the West Africa ICT Action Network for organizing the seminar, describing it as a once-in-a-lifetime opportunity for the female journalists.