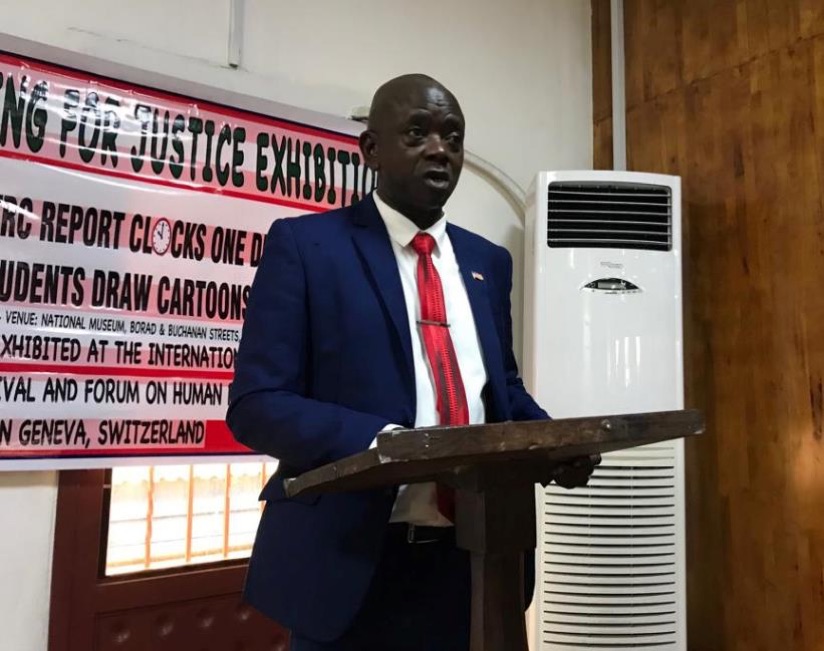 MONROVIA, Montserrado â€“ A lead campaigner for justice for war victims in Liberia, Hassan Bility, has commended President George Weah for seeking legislative guidance in the implementation of recommendations of the Truth and Reconciliation Commission, including the establishment of a war and economic crimes court.

Bility is the director for the Global Justice Research Project, a non-profit and non-governmental organization that documents war-related crimes in Liberia and, where possible, seeks justice for victims of said crimes, with full consent of the victims.

Since it was founded in 2012, the group has worked with Civitas Maxima, a Geneva-based non-profit and non-governmental organization to prosecute perpetrators of war and international crimes in Liberia outside the country.

Following the recent National Economic Dialogue held in Monrovia, Weah wrote the National Legislature for its advice and guidance on the full implementation of the TRC recommendations, including the establishment of a war and economic crimes court.

The president, in his communication which was read in Fridayâ€™s session of the House of Representatives, said a majority of participants of the dialogue emphasized the need for individuals to account for past human rights violations.

He said the creation of the special courts were part of immediate and medium-term actions needed to revive and grow the countryâ€™s economy.

The president further noted that the United Nations had also brought to the attention of the government two sets of amendments to the Rome Statute of the International Criminal Court, including the War Crimes Amendment and Crime of Aggression Amendment.

â€œAs President of Liberia, I am committed to a holistic implementation to the National Consensus and do hereby call on the Legislature to advise and provide guidance on all legislative and other necessary measures towards the implementation of the TRC report, including the establishment of the Economic and War Crime Courts,â€ he said.

In an interview with The Bush Chicken, Bility said he believed that the presidentâ€™s call was a step in the right direction.

â€œThe challenge now is with the legislators,â€ he said. â€œThe ball in their court.â€

Bility said his group had assessed Weahâ€™s position on justice and accountability and concluded that his position had not officially or practically changed from when he served as UNICEF Goodwill Ambassador when Weah supported a war crimes court. Rather, Bility believes that the president has been concerned if implementing the TRC report was wholly supported by the majority of Liberians.

â€œIt wasnâ€™t that he said he was not going to do it, but this does not and did not require agreement by the Liberian people. This is an international obligation. So, Liberia had to honor its treaty obligations,â€ he said.

Bility said lawmakers, however, have been apprehensive about the call for a war crimes court because they assumed that the president did not support the call. He, however, cautioned against publicly indicting others, noting that the TRC recommendations are recommendations and not indictments.

â€œUnder our law, there is something called the presumption of innocence. Everybody is presumed innocent until proven guilty in a court of law. In the absence of that, you can have probable cause to investigate people, but you cannot stop people from enjoying their basic rights because the TRC named them,â€ he stressed.

â€œSo, we cannot afford to keep pointing fingers. We have to wait on the [House] whose responsibility it is to set up the court.â€

Following the establishment of the special court, he said individuals recommended by the TRC for prosecution would have to be reinvestigated by the court. However, he said evidence to indict individuals must meet minimum international standards because war crimes are international crimes.

â€œIt is going to be a little bit surprising that some of those individuals named there, those laws may not be applicable to them, and they may have to walk free. This is the reality weâ€˜re going to have to live with because itâ€™s the law,â€ he added.

Bility also suggested that a single court would not be sensible for judging war and economic crimes and that two separate courts would be needed because of the different natures of the crimes and the types of evidence required.

He doubts if there would be any donor that would be willing to sponsor an economic crimes court.

Additionally, he said in order for a bill to come out of the legislature, it must be harmonized to carry a single name.

â€œYou canâ€™t have one bill with two separate names,â€ Bility said. â€œTechnically, war crimes [are] separate and economic crime is separate. So, maybe, a better way would be the bill to set up or the bill to implement the TRC recommendations. That could be a better way to say,â€ he added.

The justice campaigner at the same time warned lawmakers issuing comments to threaten their colleagues or other individuals, against their support or comments to support the establishment of a war crimes court in the country.

â€œWe do not want lawmakers to try to intimidate people. We will make sure at the Global Justice Research Project and working with other organizations internationally to push for sanction against some of these individuals because this is what the Liberian people wanted,â€ he said.

â€œWe cannot afford to intimidate lawmakers because they think they may be prosecuted.â€

In late 2018, Nimbaâ€™s eighth district representative, Larry Yonquoi called on Senator Prince Johnson to desist from making threatening statements against individuals supporting the calls for the establishment for a war crimes court in Liberia.

Yonquoi disclosed during a live radio discussion on OK FM that Senator Johnson was using the county to instill fear among Liberians over the calls for the establishment of a war crimes court.

The statement followed a series of comments by Johnson against groups and individuals calling for the establishment of a special court to prosecute individuals indicted in the Truth and Reconciliation Commissionâ€™s final report, for atrocities committed during the countryâ€™s prolonged civil war.

Johnson was one of the key players during the Liberian Civil War that lasted for about 14 years, killing an estimated 250,000 people and displacing a quarter of the population.