BUCHANAN, Grand Bassa – Family members of a woman who died in July as a result of a retained placenta after giving birth in Grand Bassa’s second district are calling for an overhaul of the country’s health system to better serve the public.

A retained placenta is when part of the placenta remains in the womb after giving birth. It is one of the main causes of maternal deaths across the world.

The victim, the 35-year-old Marie Gorwor, was a resident of Florr Town and died while family members were making efforts to get a vehicle to transport her to the public referral hospital in Buchanan.

Four family members, Aaron Kennedy, Clinton Koon, Alexander Roberts, and Morris Gunnue, told a team of journalists in Buchanan that they had placed a call to the Liberian Government Hospital in Buchanan for an ambulance, but the hospital told them to purchase seven gallons of fuel first.

“So, we decided to bring her on our own on the main road in a hammock because we didn’t have the money,” Kennedy said.

For more than two hours, he said they walked from their village towards the main road, where they could access a commercial vehicle to rush their patient to the hospital. Unfortunately for them, she died on their shoulders, while on their way.

The family immediately returned the lifeless body of Gorwor to their village for internment.

Meanwhile, relatives are blaming Gorwor’s death on the inability of the hospital to fuel its ambulance. They called on the government to provide the necessary support to the facility to avoid future occurrences.

Buchanan’s Liberian Government Hospital also caters to residents of Sinoe and River Cess, where health facilities are even less equipped. However, like many other facilities across the country, the hospital has been facing a chronic shortage of fuel, drugs, and medical supplies.

Grand Bassa’s Health officer, Dr. Anthony Tucker, confirmed the hospital’s current inability to provide ambulance services due to a fire incident that occurred in the facility last year. Tucker said the fire damaged some major departments and the infrastructure of the hospital.

He said renovation on the hospital’s damaged facilities are now completed and new generators have been acquired, but that there was still a challenge with getting fuel supply.

Earlier this year, the county health officer alarmed that the Buchanan Government Hospital risked closure due to a lack of financial support from the government.

Currently, he said most of the cases are now being referred to Monrovia due to the lack of some specific services at the hospital because of low funding and medical supplies.

“When the hospital was quite functional, the ambulance service was running. But due to some of the financial constraints that we are having now, we don’t have a fully functional ambulance service. So, relatives and friends of patients have to make sure that their patients reach Monrovia where they can provide care,” he explained.

“Ambulance service is very important for any health service, I must tell you. But the hospital has done what it could do until it has exhausted the available resources and fuel that was available for ambulance service.”

He said in cases where patients need immediate medical attention, family members are requested to facilitate the movement of the ambulance or get the patient to the hospital in another vehicle.

“The situation is pathetic and we hope that something can be done about this,” he said. “We hope that the hospital can receive its allotment so that we can be able to take care of some of these things.

He said being a medical practitioner and knowing that a patient is in a critical condition but cannot reach the facility is worrisome. Such delays can increase the country’s mortality rates, he noted.

The hospital’s Medical Director, Dr. Abraham Jawara, said although renovation on the hospital has been completed, it is unable to operate as it did before because of the lack of funds for fuel to run the hospital.

“The hospital is not taking in patients. We are not doing surgical work because of a lack of allotment to continue running the generator and other activities in the hospital. We are not able to go full scale right now because of that, but we are still managing to run the hospital on an outpatient basis,” Jawara said.

According to him, the hospital is currently only providing services such as antenatal care, reproductive health services, treatment of HIV and AIDS, tuberculosis, and immunizations. He said patients coming under critical conditions are referred.

“We presently do not have any functional vehicle, least to say an ambulance,” he said.

“The only ambulance we have that is functional is down and was sent to the mechanic through the initiative of the county superintendent. We hope that can be fixed so that we can have at least an ambulance to cater to our patients. Presently, those from the rural areas who seek medication to transport themselves.”

He referenced another case where the hospital received a call for a pregnant woman who needed emergency medical attention. She bled to death because there was no fuel available for the ambulance to get her to the hospital. 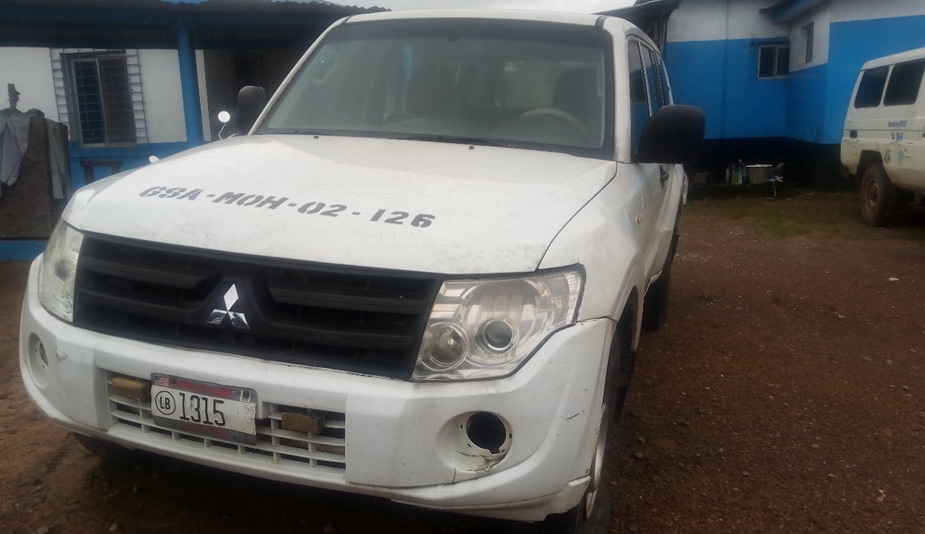 A September 19, 2019 press release on maternal mortality from the World Health Organization revealed that severe bleeding after childbirth accounts for nearly 75 percent of all maternal deaths. Others are infections after childbirth that can contribute to deaths of mothers, high blood pressure during pregnancy, and unsafe abortion.

Jawara added that Superintendent Janjay Baikpeh, whose vehicle was recently used to transport accident patients to the John F. Kennedy Hospital in Monrovia, had recently told the assistant superintendent for fiscal affairs to work along with the hospital to fix the ambulances, including his official vehicle. He said one of the ambulances has already been taken to a garage.

According to the medical director, US$200,000 allotted for the hospital in the 2018 budget was not delivered in full, and only US$95,000 was accessed by the hospital.

“We received some drugs two months back and those drugs are basically drugs for malaria and antenatal care. So, those people who come to the hospital, especially pregnant women, are being catered to with those drugs,” he said.

Liberia’s chief medical officer, Dr. Francis Kateh, however, told The Bush Chicken that allotments for fuel do not come from the Health Ministry because the Buchanan Government Hospital manages its own budget.

“I think that question about the fuel and other stationery goes to the county health officer and the medical director of the hospital. We run a decentralized health care system. So, people get their own budget, and based on the availability of their budget, they program what they need to prioritize. It doesn’t come directly from the ministry,” Kateh said.

Meanwhile, the chairman of the Grand Bassa chapter of the National Civil Society Council of Liberia, Bailey Tokpah, is calling on local and international NGOs and humanitarians individuals and institutions to come to the aid of the hospital, in order to rescue more people from dying as a result of the hospital’s incapacity to handle cases.

Tokpah also wondered why women were still dying at childbirth when the county, which hosts the country’s second most important port, raises so many revenues for the government.

“The government needs to act. This is the only government hospital we have, it is not everyone that can afford,” he said.

Nimba’s third district representative, Joseph Sowanbee, who chairs the committee on Health at the House of Representatives confirmed delays in the disbursements of allotments to the hospital.

“It is true, allotment not going in full. It is not unique to one hospital – all of the hospitals. It is due to the financial crisis,” Rep. Sowanbee said.

“That is something the government is now trying to take a proactive approach towards. All of them can get allotment, but to receive those allotments has been the problem.

According to him, the budget shortfall affected all sectors of the government.

Some residents of Grand Bassa have also begun raising funds through the community radio stations to facilitate the purchase of fuel and essential drugs referral hospital.