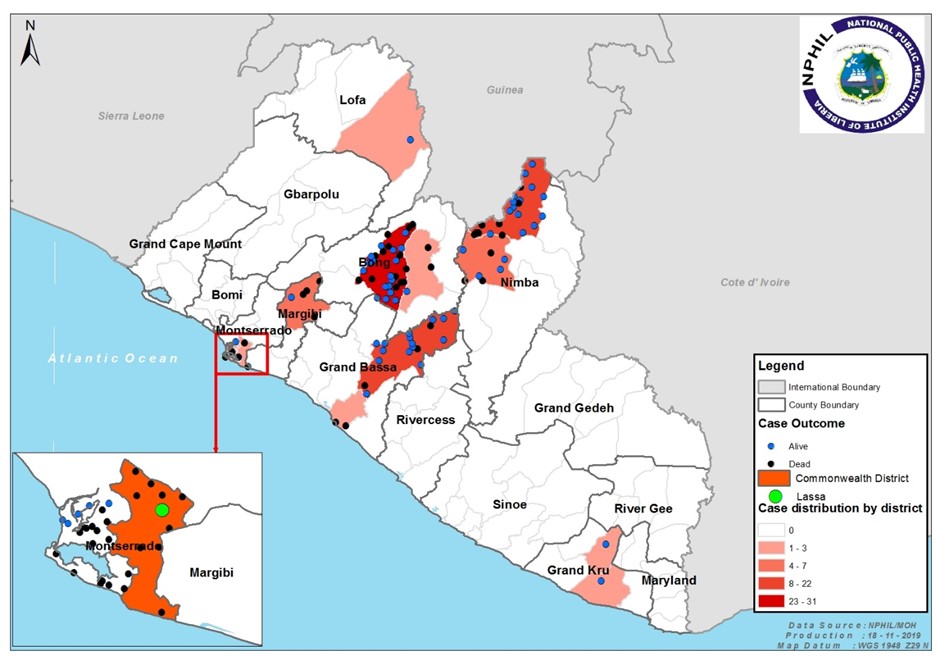 MONROVIA, Montserrado â€“ The National Public Health Institute of Liberia and the World Health Organization have responded to new reports of at least two cases of Lassa fever in the country.

The latest report was released on November 28 and covers the period between August 22 and November 22, 2019.

The report revealed that the two confirmed cases were found in the areas of the Liberia Agriculture Company in Buchannan, Grand Bassa. Since Aug. 22, additional cases have been confirmed â€“ eight in Bong, 11 in Grand Bassa, and one each in Nimba, Margibi, and Montserrado, according to the report.

The report also confirmed 6 deaths â€“ two in Bong and one each in Grand Bassa, Margibi, Nimba and Montserrado. Sixteen of the confirmed cases of the disease were, however, have been successfully treated and the patients discharged.

In early December, both institutions had reported that 18 new cases of the disease have been â€œline listed,â€ a process which allows tracking of patients of disease outbreaks in order to curb the spread. Of a total of 362 confirmed cases thus far, 145 come from Bong, 100 from Grand Bassa, 43 from Nimba, 48 from Margibi, and 26 from Montserrado.

Some 152 health workers fighting the disease are also being followed up for symptoms.

For the cases which have been confirmed, treated and discharged, a 21-days â€œfollow-upâ€ period is required following discharged to ensure the patients are fully cured and have no chance of infecting others.

Some 261 to a total 362 patients successfully completed their 21-days â€œfollow-upâ€ and discharged without recurring symptoms. Of these, 125 were from Bong, 88 in Grand Bassa and 48 in Margibi, according to authorities.

According to the Lassa fever update, 46 confirmed cases, including 14 deaths have been reported since the beginning of 2019.

â€œThe incidence management systems at national and county levels have been activated and continue to coordinate the county-led response activities,â€ the update provided.

Health authorities declared a Lassa fever outbreak between August 22 and 25 when a health worker was found to be infected at the Phebe Hospital in Bong. Following confirmation of this case, an outbreak was declared in six health districts across five counties, namely, Sanniquellie- Mah District in Nimba, Suakoko District in Bong, District 3A and B in Grand Bassa, and Somalia Drive district in Montserrado, according to health authorities.

Health authorities are particularly fearful of a major outbreak in the most populous county of Montserrado, the seat of government in Monrovia, where over a million people live. Heightened vigilance in the county has, therefore, led to vigorous treatment and follow-up of all confirmed cases, including the mandatory 21-day follow-up.

Following the last update in Week 46 in Nimba, health authorities maintained that no confirmed case had been reported in the region. The first confirmed case there, according to authorities, involved a 19-year-old pregnant patient and resident of Glenyilue Community, in Sanniquellie Mah District adding who on Nov. 8 visited a Ganta community clinic for antenatal care, but also suffered from weakness, poor appetite, weakness in the eyes, body pains and malaria.

Although the patient was initially misdiagnosed for Typhoid fever at the Ganta United Methodist Hospital, she eventually came down with the Lassa fever. While awaiting results for further analysis of her specimen, the patient died on the same day on Nov. 18, according to health authorities.

In Bong, authorities continue to monitor the outbreak. All persons who made contacts with the two confirmed cases since on November 3 have completed the required 21-day follow up.

Given the poor state of Liberiaâ€™s health infrastructure, health experts remain vigilant and highly alert for new cases. They are also monitoring patients who have been discharged following treatment.

In 2004, a major Ebola virus disease outbreak in Liberia, Sierra Leone, and Guinea exposed major gaps in the countriesâ€™ health systems. But Liberia was worst hit. Some 4,800 persons died in Liberia from Ebola.

The lessons from the 2014 Ebola virus outbreak are pushing the current around-the-clock response now underway in response to the Lassa fever outbreak.

The disease is known to be endemic to rodent populations in parts of West Africa. It can be prevented by eliminating rat populations and executing high sanitary measures in food, cooking, and eating utensils.