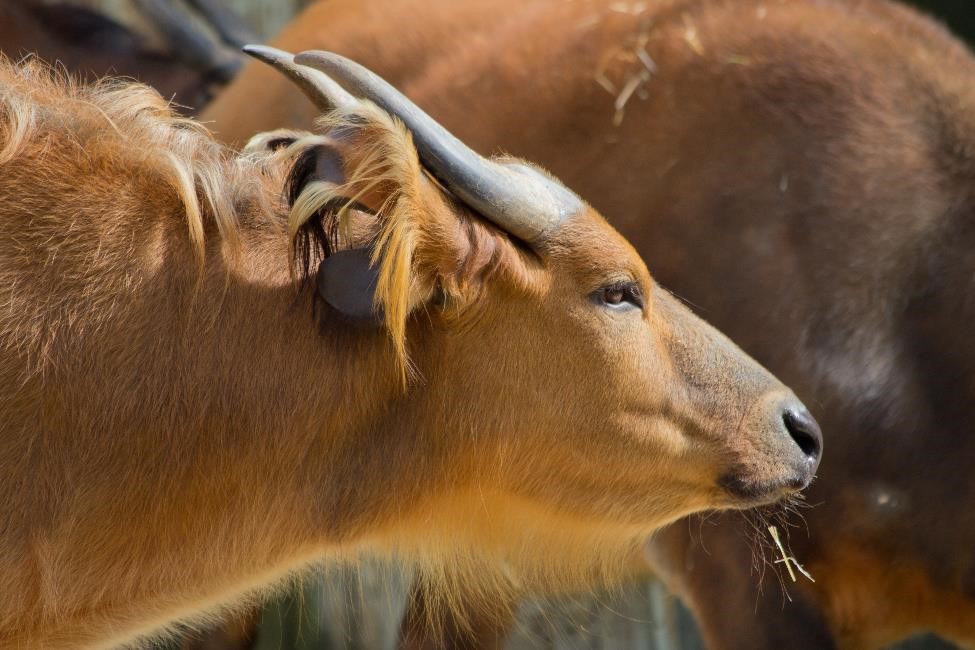 WEAGAR TOWN, River Cess â€“ Reports of rampaging forest buffalos are emanating from Weagar Town, River Cess, where the animals have destroyed numerous farms in the town and are causing farmers and surrounding villagers to abandon their farms and homes.

These reports were first received early this year at the start of the farming season, but the situation has since intensified. More than a half-dozen farms are reportedly affected. And despite the ongoing harvest season, farmers are refusing to venture on their farms for fear of being attacked by the animals.

Known in Liberia as a â€˜bush cow,â€™ the African forest buffalo is a smaller subspecies of the Africa buffalo and mainly inhabits the rainforests of central and western Africa, in areas that border savannas.

Johnson Blojay, a resident of Weagar Town and Clan Chief of the area, told The Bush Chicken of the recent destruction of his ten-acre farmland on which he had planted over 20 bags of seed rice. He said the animals â€œbrushed the entire farm,â€ destroying it.

â€œThe painful part is that the farm got ripe and we got ready to harvest before the animals started eating the rice,â€ Blojay said. â€œBecause they [the bush cows] are always on the farm, the women and children alone canâ€™t go there to cut [harvest] the rice.â€

Early sightings of the animals were reported to local county officials and the media, but little or nothing was done to tackle the situation. Residents of this area in the east of Timbo District, River Cess have relied on farming and hunting for their livelihood for generations. However, as these animals emerge from the forests to destroy farms and hurt people, agricultural productivity is being badly affected.

Matthew Dyeogboh, who has a farm in Bablozohn, some seven kilometers from Weagar Town, narrated a similar ordeal involving the forest buffalos which he says have eaten his crops, including rice, plantains, and pineapples, leaving nothing for his family to harvest.

In one instance, Dyeogboh came face-to-face with at least four of the animals on his farm, causing him to prevent his wife and children from farming there alone, if at all.

â€œIf I think about the kind of suffering in farming work and looking at my entire farm being destroyed by bush animals, just like I should do something to myself,â€ Dyeogboh said. â€œThroughout my life, only farming work I know. And this has not happened to us like this before â€“ only this year we are experiencing this to this degree.â€

A hunter, only identified as Jerry, told The Bush Chicken that â€œto go on any farm right now you people have to go in group and not two or three persons,â€ a â€œI [am] able to kill that thing with traps but as soon you do it, government will start to put false crimes on you. We’ve been talking, calling them to do something about this but they [are] pretending like they are not hearing us.â€

â€œRight now, it is risky to send your wife and children on the farm alone,â€ Jerry said. â€œI canâ€™t go with them on the farm because Iâ€™m not always here. Even if I am here, what can one man do in front of [a] bush cow [with] no gun? So it is better we stay home.â€

Nora Kamokai, the agriculture coordinator for River Cess, acknowledged receiving reports of these developments. But she says her office is hamstrung to take any actions due to lack of essential â€œlogistics.â€

Kamokai describes the situation as a â€œreal disasterâ€ that must be addressed in order to avoid a situation of food shortage in the county. In a statement to The Bush Chicken, she also confirmed that the Agriculture Ministry is partnering with the Forestry Development Authority and the Environmental Protection Agency to resolve what is now an urgent crisis.

â€œThis is not the first time we are hearing reports about bush cows destroying farms,â€ Kamokai said. â€œBut the situation needs some collective efforts. I will communicate it to my bosses but I canâ€™t say any otherwise because the animal we are talking about is a protected animal.â€

When contacted, the FDAâ€™s regional forester, James Flomo, confirmed that his office has already dispatched a team of rangers to seek out and possibly hunt down the animals that have left their forest habitats.

If the animals are simply seeking paths to migrate, Flomo said his office will create a corridor for them to prevent from straying into and destroying more farms. However, should their destruction of farms continue despite this measure, more severe measures could be taken, despite the fact that the animals are protected species under national and international laws.