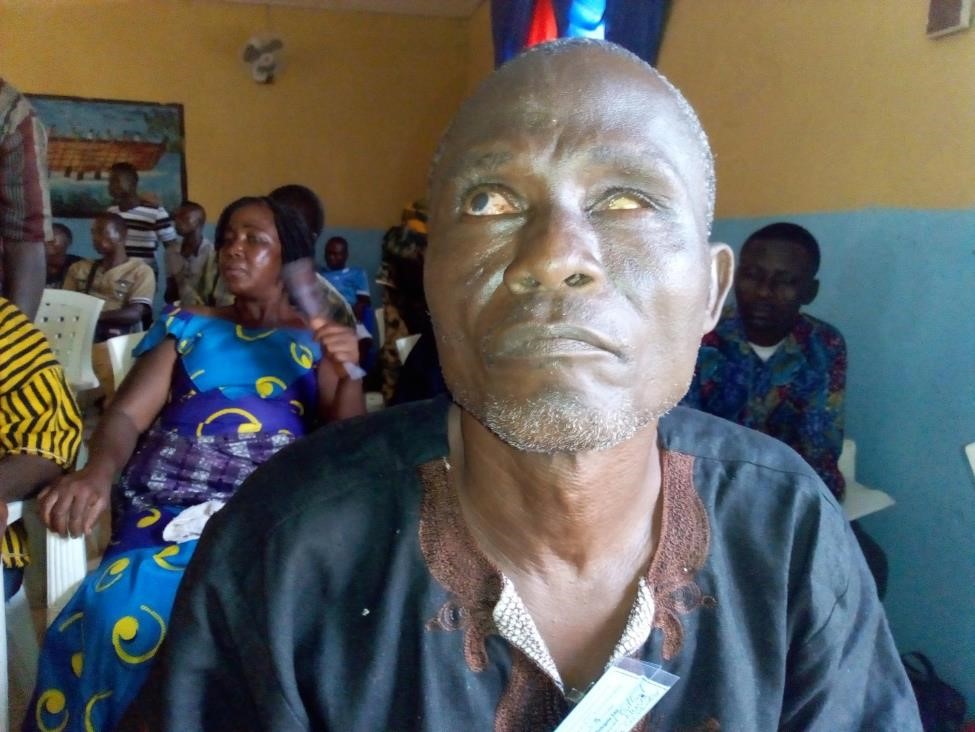 CESTOS, River Cess – People with visual impairments in River Cess are saying the lack of any support from the government is forcing them to go begging for handouts, even as the COVID-19 pandemic rages.

Despite health authorities asking people to maintain social distancing and avoid crowded areas to prevent the spread of COVID-19, many visually impaired persons in River Cess say their struggles with basic needs like food and health care means they must violate these rules and expose themselves to the virus by going out to beg.

Sarah Thomas, a 50-year-old woman and the co-chair of the River Cess’ branch of the Christian Association of the Blind, an umbrella organization for visually impaired people, said apart from telling them to wash their hands, no one from the local government cares to give them food.

”Since this sickness came and they say we should just be washing our hands, we’re just washing our hands, but nothing behind the washing hands,” Thomas said. “Because I don’t [have] food, I don’t have anything, that’s why I just bear it to go around with fear, begging for food because empty bag can’t stand.”

Simon Outland, who also has a visual impairment, is the head of the disability community in the county. He pointed out that the pandemic is making life unbearable for them because they have no means of finding food and other basic essentials.

“We [have] cried and cried to our local government, but none of them cares. None of them have ever come here to see what is happening,” Outland said. “So you know we have been greatly affected by this COVID-19.  Because [a] hungry man has no option and we are hungry. We are risking our lives going around in search of food and other basic needs because if we don’t do that, we will die here.”

River Cess’ county information officer, Isaac B. Williams, admitted that since the outbreak of COVID-19 in Liberia and the subsequent lockdown, the River Cess government has not made any intervention in regards to the wellbeing of people living with disabilities in the county. However, he did say local authorities advocated to have some humanitarian groups donate food to the community.

“There are several entities – when they come in the county and they want to make some interventions, they ask for areas of priority and we recommend the disabled community, considering the fact that people living with disabilities during situations like these will not go about their normal activities as they used to do,” Williams said.

As a result of the county administration’s recommendations, Williams said the Arthur Sawmadal Foundation and the Inter-Sectorial Association donated food to people living with disabilities, including those with visual impairments. However, Adam Sawmadal, the executive director of the Arthur Sawmadal Foundation, said his organization’s gesture to the disabled community was not based on any recommendations from the county government, as claimed by the information officer.

Both Outland and Thomas also told The Bush Chicken that since the outbreak of the virus in the country, they have elected not to go to health facilities for treatment due to fear that they might be diagnosed with COVID-19.

“COVID-19 is similar to Ebola, so since the lockdown, none of us has ever gone to the hospital because we’re afraid. Maybe the proper care may not be given to us,” Outland said.

“Maybe they will announce us and say this is one of them or you have the sickness, so because of all of those things we [are] afraid, but before then, we used to go to the hospital.”

However, Yugie Flomo River Cess’ Health Promotion Focal Person, says no one should fear going to health facilities. Not everyone that goes to the hospital is diagnosed with COVID-19, Flomo said. Since the virus arrived in Liberia, River Cess has only had one confirmed case.

According to World Services for the Blind, blindness and vision impairment are not on the list officially of at-risk factors when it comes to COVID-19. But as individuals with disabilities, the visually impaired should be considered at-risk, given their reliance on their sense of touch.

Additionally, while visual impairment alone does not make a person more susceptible to the Coronavirus, other immunity compromising conditions that cause blindness, such as diabetes and aging, are more frequent within the blind population. Blind people are less able to practice social distancing when using public transportation, exploring items tactilely, and requesting assistance from others.

Sharing
Tags Christian Association of the Blind, Coronavirus, Isaac Williams
Contributions to The Bush Chicken are not tax deductible.