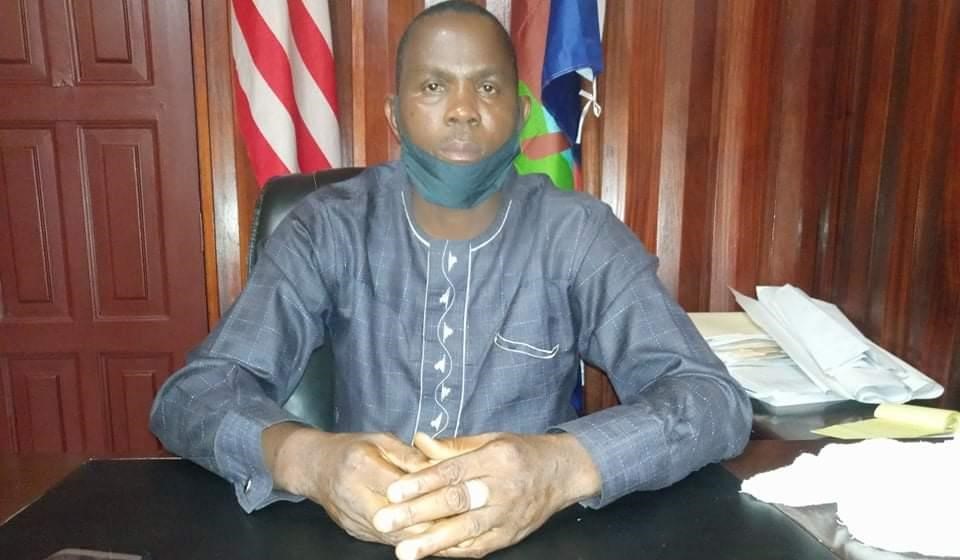 SANNIQUELLIE, Nimba – Amid a growing number of corruption allegations against him, Nimba’s Superintendent Nelson Korquoi is proposing auditing past and present leaders of the county.

Since his appointment as county superintendent by President George Manneh Weah and subsequent confirmation by the Liberian Senate earlier this year, Korquoi has been linked to several dubious deals including the illegal sale of the county’s scrap metals, the sale of a pickup truck belonging to the county’s project management committee, and the misappropriation of L$500,000 (US$2,512) given to Nimba by the Ministry of Youth and Sports as Nimba’s share of the proceeds from the National County Sports Meet.

On July 6, Korquoi addressed a press conference in Sanniquellie where he denied any wrongdoing. He blamed the allegations on disagreements he had with other county leaders.

“The reason people are falsely accusing me is because I have refused to submit to that their old way of corruption,” he added. “I have promised a corruption-free regime and I am committed to ensuring that that promise is kept.”

For the short time he has headed the county government, Korquoi said it has become clear to him that past leaders have mismanaged millions of dollars meant for the development of Nimba: “Our machines are down, even though millions of United States Dollars was allocated for their repair during past sittings. But they are all grounded because of the misuse of those funds by our leaders.”

He promised to conduct an audit covering the period from 2014 to 2020 after the upcoming county council sitting. Those found responsible for embezzling the county’s money following the audit would be made to pay back the fund or face legal actions, he vowed.

“In an effort to ascertain what all transpired in Nimba before our administration, we will recommend that the previous administrations’ operations be audited to set the records straight,” Korquoi said.

Korquoi said the companies were given legal right to transport their scraps out of Nimba by the Supreme Court.

He noted that a recent investigation conducted by members of the Nimba Legislative Caucus and some civil society organizations exonerated him from being involved in any dubious scrap deal.

Korquoi also said recent allegations that he misused the L$500,000 given to Nimba in March by the Ministry of Youth and Sports was false. Displaying the check to journalists on July 7, Korquoi said he had not yet deposited the cash because he needed to identify signatories to the county’s Sports Association account.

The check shown to reporters on July 7, 2020. Photo: Jerry Myers

As Nimba prepares to partake in the 2020 edition of the National County Sports Meet, the county superintendent said the money would be presented to the appropriate authority to be used to prepare the team.

Korquoi, who once served as deputy coach for the county’s football team, said it was shocking to know that the county has been receiving proceeds from every occurrence of the tournament, but those who have been heading the sporting association in the past have not properly accounted for.

“What has happened to our gate intake from 2014 till present?” he told reporters. “We are going to investigate this and those who will be caught will be dealt with.”

Meanwhile, the superintendent has turned over the check to the county’s assistant superintendent for fiscal affairs, Saye E. L. Musa, for depositing.

Sharing
Tags Nelson Korquoi
Contributions to The Bush Chicken are not tax deductible.