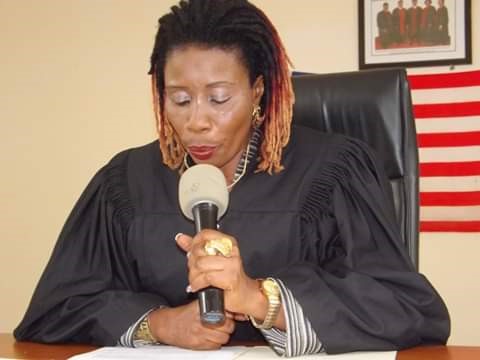 Speaking on Monday, Feb. 10 at the opening of court Sammie spoke of the need for lawyers to take their oath seriously and defend the constitution and laws of Liberia.

She also admonished lawyers regarding their sacred duty to safeguard the interest of their clients. This, she said, does not necessarily mean lawyers must seek to win every case all the time and at all costs.

â€œYour oath compels you to look after your clientâ€™s interest. So as a lawyer, that is your first line of responsibility,â€ she said. Safeguarding the clientâ€™s interest, Sammie said, also involves seeking the opportunity to settle legal disputes before resorting to court battles.

â€œIt is the obligation of lawyers to first seek the facts from their clients before coming up with opinion,â€ she said. Judge Sammie made these particular comments out of concern that many lawyers were pushing their clients into initiating litigations for the sake of charging legal fees.

Sammie took the opportunity of the courtâ€™s opening to also appeal to lawyers hailing from the Bomi Bar Association to support and contribute to various programs of the county bar in order to enhance its effectiveness.

On the courtâ€™s docket for this February term are a total of 24 cases, 11 of which are criminal cases ranging from murder, statutory rape, gang rape, and illegal possession of narcotic drugs. Additionally, there are 13 civil cases ranging.

Responding to the judgeâ€™s charge, Bomiâ€™s county attorney, Abraham Tamba, assured Sammie of the barâ€™s full commitment to the success of the February term of court, assuring her of the utmost integrity by all lawyers of the court.

Meanwhile, the president of the Bomi Bar Association, Cllr. P. Siaffa Carrey, encouraged his fellow lawyers to cooperate with the judge while maintaining the highest level of credibility.