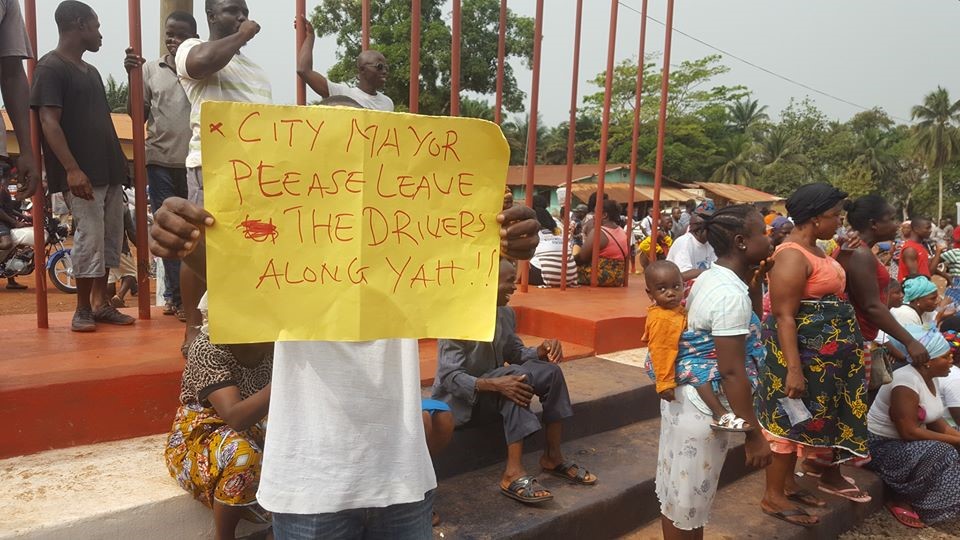 KAKATA, Margibi â€“ A new city regulation relocating three parking terminals and barring street selling in Kakata has led to a weeklong protest by vendors and commercial drivers. The new regulation being enforced was introduced by the Kakata City Corporation.

The groups providing commercial transport service in Kakata, Federation of Road Transport Union of Liberia and the United Drivers Union, have resisted their relocation to a private property on the outskirts of Kakata.

Kakata Mayor Emmanuel Goll and scores of commercial drivers were in a war of words for nearly three days over the enforcement of the new mandate to prevent commercial vehicles from being loaded and offloaded on the cityâ€™s main street. Armed police officers barricaded the major parking spaces of both transport unions.

Goll has disclosed that the new decision is meant to decongest the street, given that throngs of passengers boarding commercial vehicles often clog the street. The city street forms part of the Suakoko Highway that directly connects Monrovia and Gbarnga, a situation that has often caused the obstruction of traffic in the city.

Protesting the enforcement, drivers in Kakata parked their vehicles, refusing to transport commuters. The drivers vowed not to abandon their protest action authorities of the city corporation can reverse the decision, noting that the regulation was not in their interest.

Bello Bondo, the president of the Margibi chapter of the road transport union, accused a local entrepreneur, Sackie Flomo, of manipulating the relocation of the parking terminals to a new chain of stores he has built in order to attract customers.

Bondo argued that the facilities currently used as parking terminals are places owned by the union over the years, adding that relocation would create new challenges for them.

â€œThey have no justification to illegally send police to come and attack drivers. They said they are effecting a court order, without a document from the court,â€ he said.

According to him, at least six accidents were recorded at the new location, which makes it unsafe for a parking lot.

At the same time, a group of market women decided to shut down their businesses last Thursday and besiege the offices of the county superintendent, Jerry Varnie, protesting in solidarity with the commercial drivers.

The women claimed that the driversâ€™ protest was affecting their businesses as their movements have become restricted. The women also submitted a petition to the local county authority noting that it would also be a risk to transport their goods to the new market location, especially early mornings and late evenings, because of the relatively high crime rates.

The women said they needed the situation resolved quickly in order to pay back micro-loans from their sales.

Margibiâ€™s legislative caucus appears divided over the current regulation imposed by the city. Senator Oscar Cooper, the co-chair of the caucus, called on commercial drivers to embrace the new measure during a radio appearance. He said it would give the city a facelift. But Rep. Ben Fofana of the fourth district, who chairs the caucus, told drivers not to follow the new rule. He described the new measure as â€œsheer arrogance.â€