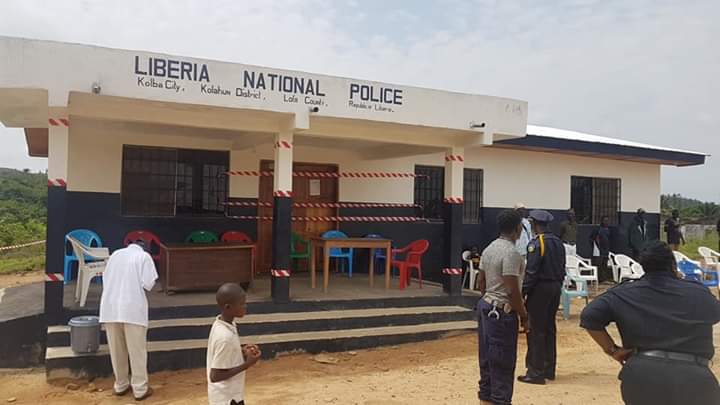 KOLBA, Lofa â€“ The Liberia National Police has officially dedicated and turned over a new police station to the people of Kolahun District. The station was funded by UNDP.

Kolahun District had one of the worst police stations in Lofa. In early 2019, however, Inspector General Patrick Sudue visited the district and decided to lobby for a new station.

The official opening was held on April 23 in Kolba, with government officials and residents in attendance. The rehabilitated station now includes four offices, four bathrooms, and two cells.

Lofa Police Commissioner William JohnsonÂ thanked the U.N. agency for its support to the security sector.

“It is now time for community residents to take advantage of the police station in seeking redress to violence and crimes committed in the district,â€ Johnson said. â€œAnd everyone should be promoters of peace and unity in Lofa.”

Johnson cautioned the cityâ€™s residents to take care of the station. “Most often, people go about destroying police stations in the name of seeking justice towards their concerns and problem,â€ he said. â€œThis is automatically wrong and people should stop reacting in such direction.”

A representative from UNDP, Merlin Daniel Dennis, presented the keys of the building to the district commissioner. Dennis said UNDP would continue supporting quick impact projects that benefit the people. He said senior managers from UNDPâ€™s Liberia office had planned to attend the ceremony but could not, due to the Coronavirus outbreak.

“We are committed to ensuring that the Liberian economy remains peaceful and citizenâ€™sÂ rights are guarded by law and respected,” Dennis added.

UNDP has been active in the district recently, providing the Kolahun Health Center with solar panels that nows supplies electricity to the facility.