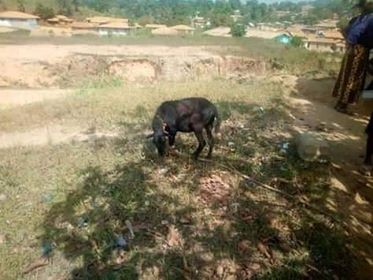 KOLAHUN, Lofa â€“ A Lofa man believed to be in his thirties has been charged and forwarded to court for allegedly having sexual intercourse with a sheep.

Momoh Kanneh was arrested on Sunday, January 12 by members of the Massabolahun Community Watch Forum and turned over to the Kolahun detachment of the Liberia National Police.

According to the chair of the community watch forum, Jeremiah Kamara, prior to the arrest, the sheepâ€™s owner had caught Kanneh on two occasions having sex with some of his sheep. Kamara said the animalâ€™s owner had twice warned Kanneh and even invited witnesses who saw Kanneh during the act on the third occasion.

â€œI told him to stay away from my sheep, but he couldnâ€™t listen, and he will pay for all the damages,â€ the watch teamâ€™s head quoted the sheepâ€™s owner as saying.

During police preliminary investigation, Kanneh admitted to the act but said he did it while under the influence of drugs.

â€œI was intoxicated with drugs and in a confused stage while performing this act,â€ he said. â€œPlease forgive me.â€

Some residents of Massabolahun town identified the suspect as a commercial motorcyclist, adding that they had never seen him using drugs before.

The Kolahun police detachment charged the defendant with cruelty to animals, a second-degree misdemeanor. Kanneh has been forwarded to the Kolahun Magisterial Court for prosecution. The courtâ€™s assistant magistrate, Andrew Kpehe, informed The Bush Chicken that the defendant was later released after family members filed a bond.