VOINJAMA, Lofa – At least four major government facilities in Voinjama have been damaged by a heavy rainstorm, displacing numerous government offices within the county capital.

The storm took place on June 9, and destroyed the roofs of many several facilities, displacing government officials. The facilities affected are the county’s administrative building, the county education office, and the presidential palace within Doe Hill Community.

Within the administrative building, the storm affected offices belonging to the Liberia Drug Enforcement Agency, the county attorney, the county inspector, the county engineer, and the Ministry of Education.

Furniture, computers, printers, and key documents were reportedly destroyed by the storm.

The county education officer for Lofa, James Zunnah, told The Bush Chicken that some books, electrical wires, and documents were damaged and he was working to locate a temporary environment that would be accessible to educators.

“Our building has four compartments, and three out of the four were unroofed and the remaining one compartment is currently leaking, which is causing a setback for us,” Zunnah said.

“After the storm, I informed my bosses at [the Ministry of Education in Monrovia] and also had [a] meeting with the county superintendent, and at this time, we are hoping that there’ll be some speedy interventions as we gear towards the opening of schools.” 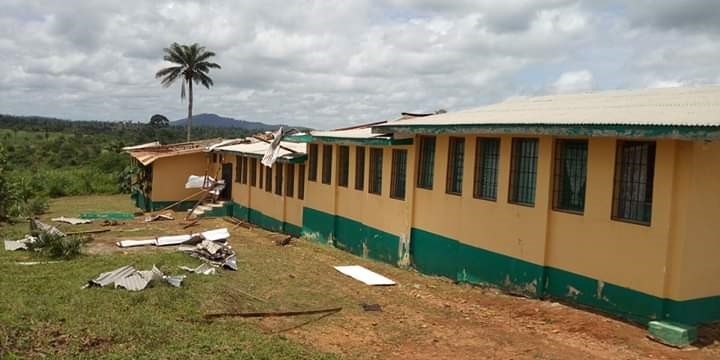 The Ministry of Education’s facility in Lofa. Photo: Kelvin Kollie

Lofa’s county superintendent, William Kamba, said he has written the National Disaster Management Agency, the Ministry of State, and the General Services Agency to provide assistance.

“And as we speak, few of my colleagues are working along with these agencies to identify and assess the number of affected facilities,” he added.

“We believe that in the soonest possible time, there will some results.”

In the meantime, Kamba said the Drugs Enforcement Agency and the Fire Service would be transferred to a temporary space within the county guest house, while other agencies would be asked to share offices.

Kamba said the administrative building had already been vulnerable, as it suffered from a fire disaster in the past and when it was renovated, the contractor used substandard materials.

“Just in two years’ time, the building has been badly damaged by [a] storm,” he noted, adding that any future renovations of the facility would ensure a stronger structure.