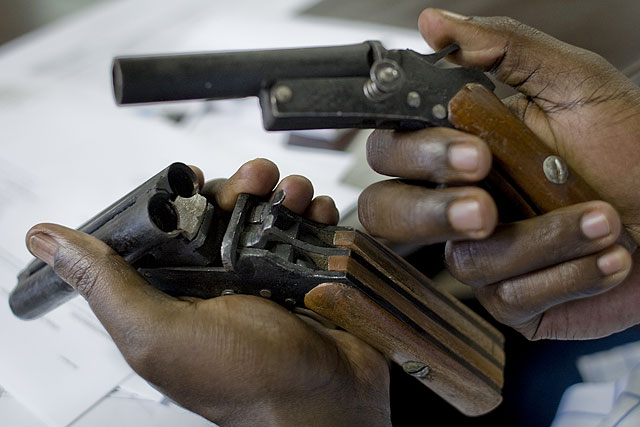 MONROVIA, Montserrado â€“ In the wake of the murder of a German national in Grand Bassa by armed robbers, the Liberian National Police has come under pressure to take concrete actions against smugglers and criminals in possession of single and double barrel guns across the country.

Grand Bassaâ€™s Senator Jonathan Lambort Kaipay described the killing of Juergen Schedemamn as a â€œhideousâ€ ambush and quickly initiated a process to invite the justice minister and the police inspector general for questioning.

The police report on Schedemamnâ€™s death alleges that a group of men, including a repeated offender, Emmanuel Kollie, attacked and murdered Schedemamn during a robbery at his compound. According to Inspector General Patrick T. Sudue, the weapon used in the crime was a single barrel handgun manufactured within the ECOWAS subregion.

Sudue revealed that the use of illegally manufactured crude firearms and ammunitions has been on the rise in the county.

â€œEvery day, we arrest people with guns and turn them over to the [Liberia National Commission on] Small Arms. They are being used for robbery because they are all over. And because of the proximity of our borders, we cannot stop them from coming in,â€ Sudue stated.

â€œThese guns are locally made guns; it is made right within the West African subregion. Some of our borders and neighboring countries are directly involved with making these weapons and people buying market are the ones bringing the guns being sold all around here.â€

Regarding the need for concerted actions from the regional body, Sudue warned that â€œIf ECOWAS does not step up to help curtail widespread production of small arms and light weapons in the region, it will be the next crisis we will find in West Africa. Right now, the blacksmiths are graduating [from] single barrels to double barrels. And next, you will hear they are producing automatics, then we are heading for something different.â€

Sudue said many blacksmiths around the country are openly manufacturing these weapons, ostensibly for sale to hunters; but too often, they land in the hands of criminals.

During further Senate questioning about the death of the German national, Justice Minister Musa Dean, disclosed that an alarming rise in crimes involved repeat offenders. This situation, he said, continues to challenge public safety. Dean suggested that an enhanced security program may be necessary to properly ensure the safety of foreign nationals in light of rising criminal activities.

According to the AG, those involved in the murder of the German national are repeated offenders who, having served their convictions, continue to commit crimes. But he assured that a subsequent guilty verdict will certainly ensure that they are put away for a long time.

In connection with the incarceration of repeated offenders, the justice minister also noted that the governmentâ€™s South Beach prison facility is stretched beyond capacity. Originally designed to house 330 inmates, the prison population now exceeds 1,300 inmates. This situation, he said, is causing new inmates to be transferred to the Grand Gedehâ€™s prison in Liberiaâ€™s southeast.

But lawyers of accused persons have objected to this practice by the government on grounds that incarcerating accused persons far away from the location of the crime, their families, and witnesses makes it practically difficult to adequately defend them in courts which are located in Monrovia.

Dean, however, revealed that the ministry had identified a parcel of land in Cheesmanburg for the construction of a new prison facility at an estimated US$6 million. But amidst Liberiaâ€™s fiscal and economic crises, this prison facility seems unlikely in the not too distant future.

The minister also called for an extension of the terms of courts across the country, a measure he says is needed to address crowded prisons. Presently, each of the four court terms in a year lasts for only 42 days. Â Minister Dean disclosed that a proposal is being presented to the legislature and judiciary to extend court terms to six months in order to deliver justice year-round.

â€œWe use a total of 675 bags of rice every month for the prisons around the country and thousands of dollars on soap,â€ he noted. â€œSometimes, we go out of our way and call vendors to supply food because under international law, once you arrest someone and incarcerate them, you must feed him or her.â€

Failure to address these serious challenges to the justice system may lead to a more serious breakdown in law and order, he warned.