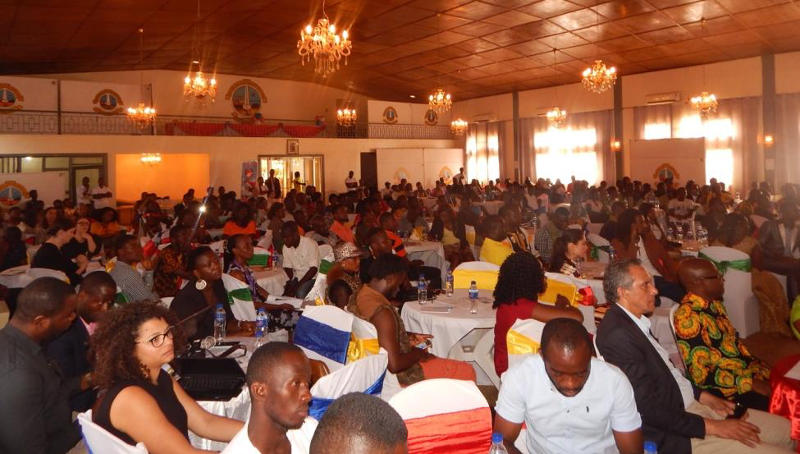 PAYNESVILLE, Montserrado â€“ With barely six months until the national elections in Liberia, youth representatives from the countryâ€™s 15 subdivisions have gathered for a national peace building conference at the Paynesville City Hall.

The two-day National Youth Peace Building Conference was organized by Accountability Lab Liberia in partnership with the Swedish Embassy and the United Nations Mission in Liberia.

More than 150 young people are in attendance to discuss the critical challenges relating to peace and security. They also plan to generate concrete plans for youth engagements ahead of the October 2017 general and presidential elections.

Young men and women from different sectors and organizations, including in and out of school youths, the physically challenged, and the less fortunate are participating in the event.

The conference is the first of its kind in the country, and provides the opportunity for young people to engage in five different work labs to discuss issues of Economic Prosperity and Entrepreneurship; Diversity, Tolerance and Reconciliation; Arts, Sports and Culture; Elections and Electoral Processes; and Integrity and Anti-Corruption.

Delegates are expected to examine pertinent contextual issues, especially those relating to the role of young people in the building of a peaceful and secure society that is economically viable, inclusive and based on respect for the rule of law.

Launching the conference on Tuesday, President Ellen Johnson Sirleaf challenged delegates to critically deliberate and broaden their knowledge on the different issues, aiming at taking the country forward.

Sirleaf said as a historic rich nation in Africa, Liberia was also troubled in history.

â€œFinancial indiscipline, the wars, the conflict â€” all just supposed by first independent nation, founding member of the UN, OAU, ECOWAS â€” all of those very mixed history, and I am sure youâ€™ve taken the time to look into it, to read and see,â€ she said.

â€œToday, weâ€™re trying our best to regain what was lost, trying to get the economy going again, trying to build those institutions that are going to manage the affairs of the nation, trying to make sure that we fight those deeply rooted cultural things that have impeded our development. You in this room are going to be the ones that will have the responsibility to carry on.â€

She reminded the young people that they were the lucky ones, to be able to discuss the countryâ€™s future, because they have the opportunity to be in school learning, participating, and contributing to the future.

â€œThere are many others who wished they could be you, way back in the back on the back lands of our nation â€” way back in the rural villages where access to education, where mobility, are so constricted,â€ Sirleaf added.

She said the opportunity of participating in the ongoing conference to discuss Liberiaâ€™s challenges is for her a tribute not just to the delegates, but to the progress and pace to the nation.

According to Sirleaf, young people constitute a majority of Liberiaâ€™s population, and that the responsibility to drive the country to a prosperous future depends on them.

Youth and Sports Minister Saah Charles Nâ€™Tow said the event is distinguished by its history, preparation and design. He praised the organizers.

According to Nâ€™Tow, the conference comes out of a genuine desire to provide a space where young people can come together to discuss critical national issues to explore possible solutions while generating new innovations.

He also encouraged the delegates to use the space to elevate their ideas and thoughts about national issues, build and strengthen networks and advance new innovations to promote peace, security and development.

â€œThis conference is where you must try to find solutions. We must not steer up the questions, so I encouraged you to think critically and put your gift of creativity to use,â€ Nâ€™Tow said.

He said as a government, the current period is critical because the process of developing the next phase of its Agenda for Transformation is in process.

â€œPlease note that whatever you generate from here will be submitted as part of your input to that process, because you now represent the voice of the young people,â€ he added. â€œSpare no efforts, lose no time, be engaged, and fully engage others so that you can do nothing less than your best. Thatâ€™s all we can ask you for.â€

Farid Zarif, the Special Representative of the UN Secretary General in Liberia, said Liberia is a blessed nation, with a very young population. More than 75 percent of its population is under the age of 35.

He said in many countries, the society suffers because of aging populations and because productivity has fallen and the burden of keeping the wellbeing and welfare of the society has become the sole burden of a very small concentration of young people.

However, he said Liberiaâ€™s youth capacity has been underutilized because of several factors.

â€œLiberia is lucky to have had peace in the past 13 to 14 years,â€ he said. â€œBut it has been also very unlucky because of certain developments on the world stage, including the collapse of the world economic performance, the Ebola phenomena and also the fall in the prices of Liberiaâ€™s strategic commodities, really impacted severely an economy that was already broken by the lengthened civil war,â€ he said.

Notwithstanding, he said the country has made a lot of progress under Sirleafâ€™s leadership.

In a separate remark, Torbjorn Petterson, Director for Africa at the Swedish International Development Agency, also praised the young people for their commitment to peace in their country.

Petterson said bringing together youth representatives from all of Liberiaâ€™s 15 counties is an opportunity for the country to listen to the collective voice of the diversity of the youths.

Sheriff encouraged children to be included in decision-making processes at every level of the society.

She said most times, children are not considered in decision-making processes, which in turn makes children feel disenfranchised.

â€œWe should be allowed to say the issues that affect us with a clear understanding that we play a very important role in maintaining the peace in Liberia,â€ she said.

As elections draw nearer, Satta said it is important to avoid sentiments and actions that would encourage violence.

She also encouraged society to provide more protection for children, noting that recent reports in the country points to increased disappearance and ritualistic killings of children.

It is envisioned that the conference will become an annual event as a platform for young people to reflect and collaborate in support of the implementation of United Nations Security Council Resolution 2250 which promotes youth representation in decision making at all levels in society.

â€œInner peace is something that glows, and if our young people can have inner peace and spread that out into entrepreneurship and economic growth and prosperity â€” appreciating diversity using tolerance as a way of reconciling with one another â€” whether weâ€™re using our talents in arts, sports and culture to push forward our nation, or weâ€™re going to elections understanding electoral processes and how we as young people are going to not be used for violence, but be used as agents of change looking at peopleâ€™s manifestos and the issues they raise, and instead of focusing too much on prosecutory anti-corruption, we can start focusing more on preventive anti-corruption raising new generations of young people by building integrity,â€ Yealue said. â€œThis is more of going to each of the five laboratories and coming up with series of solutions that our young people that are represented here will go back to their places and effect those things that will be discussed here.â€

Meanwhile, the Head of the Disabled youths in Rivercess, Sundayway Joe, said she hopes that issues affecting young people with disabilities would be discussed. Joe said the lack of support and capacity building for youths with disabilities remains a serious threat to peace in the country.

â€œI, for example as a disabled person, with no support from anywhere, go through a lot of challenges each day to get my schooling going,â€ she said.

The lack of support, she said, has caused most young people with disabilities to remain out of school in Rivercess.