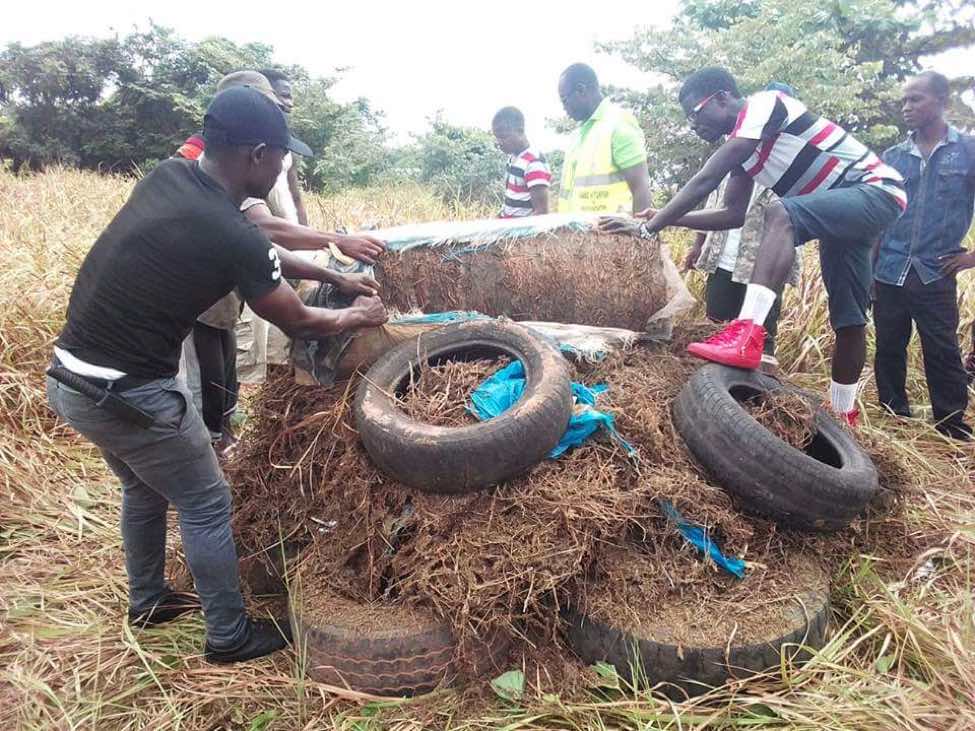 CESTOS, River Cess â€“ The Liberia Drugs Enforcement Agency unit in River Cess has finally burnt L$500,000 (US$3,246.75) worth of marijuana it confiscated three weeks ago.

The substance was seized on September 6 in the Kola Tree Community in Iti, Yarnee District.

LDEAâ€™s chief of operations, Jurry Blamo, told The Bush Chicken that the owners of the drugs escaped before his men arrived on the scene and the marijuana was confiscated without a single arrest.

The substance had been initially scheduled for burning on September 9, but that did not happen until September 22.

Residents were concerned about the possibility of misconduct with the policeâ€™s handling of the drugs. The fact that the drug bust was made without any arrest had been viewed as suspicious. The scene of the burnt marijuana. Photo: Eric Opa Doue.

When asked what led to the delay in the burning of the drugs, LDEAâ€™s commander for River Cess, Col. Irene Sirleaf Jayee, said, â€œWhen DEA arrests drugs, the drugs are burnt [on] 26 June of every year during the [International Day Against Drug Abuse and Illicit Trafficking].â€

â€œThe reason we burned this one sooner is that we do not have storage,â€ Jayee said. â€We wanted to carry it to Monrovia, but the county attorney said we should burn it here because River Cess is a county like Montserrado.â€

Along with the drugs, a single barrel rifle and two motorcycles that were being used by the traffickers were also confiscated during the raid, but one of the bikes was turned over on September 25 to Jabateh Sekou, who claimed to be the owner.

According to Jayee, the county attorney, Cllr. Morris Y. Massaquoi, ordered that the bike be released to Sekou. He was required to sign a statement guaranteeing that he was the owner of the bike. â€œI also do here commit myself to any further arrest should in case there will be any third party to make claim against the said bike,â€ the document signed by Sekou read. â€œI also promised to face any consequence arising therefrom.â€

According to the commander, the single barrel gun was turned over to the Police Support Unit of the Liberia National Police immediately following the arrest.