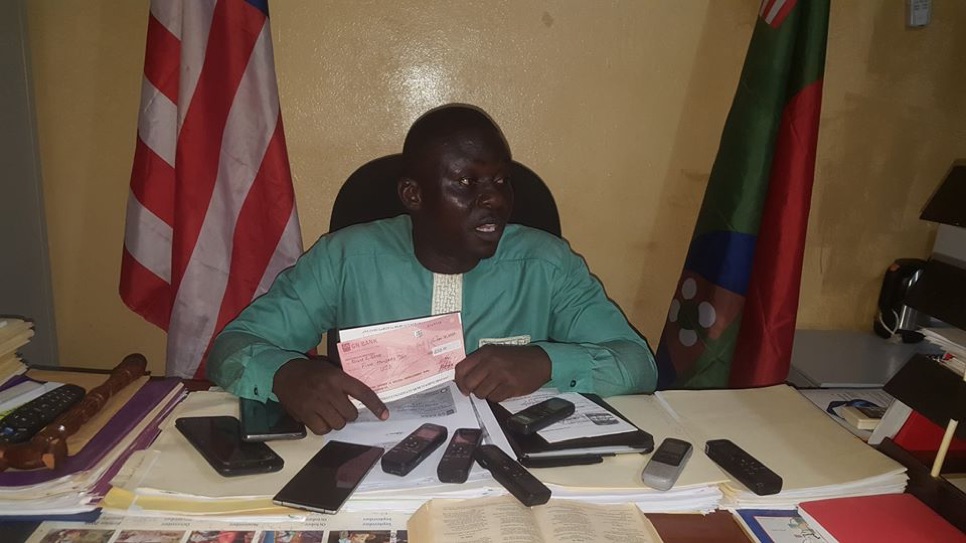 The county council sitting was called specifically to allocate US$750,000 of Social Development Funds remitted under the China Union Mineral Development Agreement. The money is part of a US$1 million payment out of a total of US$4 million provided to the three counties hosting the concession for a 10-year period: Bong, Margibi, and Montserrado. The total amount owed the three counties is estimated at US$10.5 million, but there appeared to have been an agreement with lawmakers in which the county waived US$6.5 million in consideration of the operational slowdown suffered by the company in light of the recent global reduction in commodities prices.

According to the superintendentâ€™s office, eight community radio stations in the county received US$500 each as the countyâ€™s support to their operations and maintenance.

Varnie, while presenting the checks, expressed optimism that the initial amount will help restore hope to the community radio stations, which he said continue to meaningfully inform citizens amid various financial constraints. Key among their tasks have been their reporting on ongoing county projects to ensure checks and balances in line with the Dec. 22 County Sitting Resolution.

â€œThe work you do, you donâ€™t get pay for it. [You] propagate the negatives and the positives. When we do good, [you] praise [us]; when we do bad, you [are] there to checkmate us,â€ Varnie said.

However, Radio Gbaisue reported a slight discrepancy in the amount it received. The station says it received US$450, rather than the US$500 other stations reported receiving.

When contacted, Margibi information officer Josiah Benson said the eight counties received a total of US$4,000. Benson did not deny or confirm Radio Gbaisueâ€™s claim. On the remaining US$1,000 allotted to the media agencies, he said the amount is still in the possession of the superintendent for further decision.

Reacting to the support for the stations, the countyâ€™s journalists association commended the county for the allotment, which was the first time in the history of the county fund. However, the association noted that two other radio stations were left out of allocations on grounds that the stations are already receiving substantial support from concession companies operating in the county.

The two stations left out are Stone FM and SAWU FM, owned and supported by the Firestone Agricultural Workers Union of Liberia and the Salala Rubber Corporation Workers Union, respectively.

In Dec. 2018, community radio stations in the county imposed a three-week media blackout against all activities of the county legislative caucus and local administration because of their failure to allocate resources to the local media during its Nov. 2018 County Council sitting.

In comparison during the same period, Nimba allotted US$30,000 to its community radio stations, while Bong, Grand Bassa, and River Cess also allotted US$15,000, US$8,000, and US$3,000, respectively, to their local media organizations. Even with this support, Margibi ranks at the bottom of its peers in terms of support from county development funds to community radio stations.

CORRECTION: A previous version of this article incorrectly stated that a Dec. 22 council sitting was convened to appropriate US$75,000. The correct figure is US$750,000.