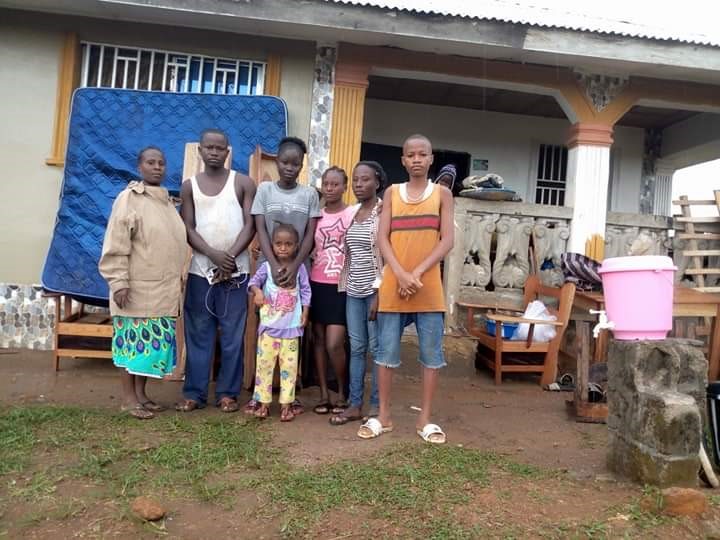 GOSHEN COMMUNITY, Margibi â€“ An early morning storm on April 6 in the Goshen Community in Margibi removed the roof of a two-bedroom house occupied by a family of seven, leaving them homeless.

Eric Dahn, who has lost his job due to the COVID-19 pandemic, is responsible for taking care of his five children and a pregnant wife. The storm has left his family displaced in a nearby unfinished building without a bathroom, owned by Emmanuel Gbarnjah. Gbarnjah is allowing Dahn to temporarily stay in the unfinished building.

On the morning of the storm, neighbors helped Dahn and his family to move their belongings from their damaged home.

â€œThis morning, as you can see the weather, we just noticed that when we were in the building where weâ€™re renting right now, we just saw the roof started shaking from the breeze,â€ Dahn said. â€œIt did not stay too long â€“ thatâ€™s how the roof was taken away from the building. But as God could have it, me and my family just have minor injuries.â€ 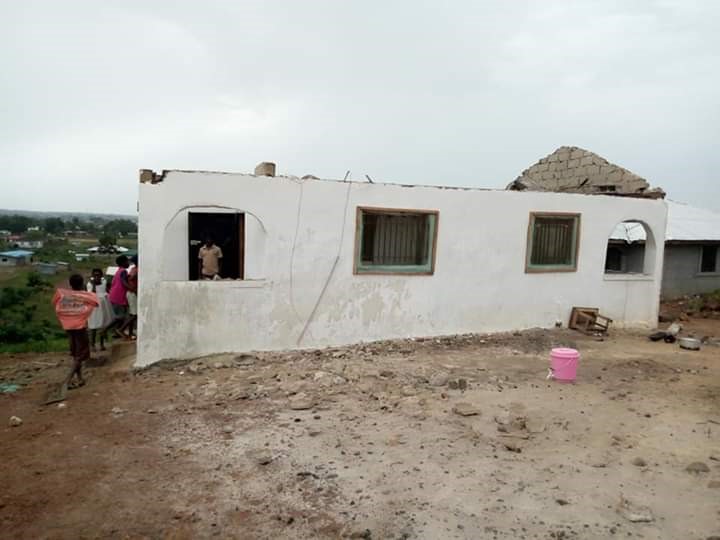 A renter, Dahn is now homeless and his landlord said he does not have enough money to repair the damaged building or to refund the balance of Dahnâ€™s rent. As is typically done in Liberia, Dahn had paid a yearâ€™s rent on the house â€“ US$600 at the rate of US$50 per month. He said he used an additional US$162 to add finishing touches to the house before moving in.

â€œI have retired ever since and my wife is not working,â€ said Shadrick Kerl, Dahnâ€™s landlord. â€œIt is even this house rent we depend on to generate school fees for our children and other needs of the family.â€

But Dahn is frustrated that his family had not even stayed long in the building before the storm. Moreover, whereas many cities across the world provide protection for tenants, across Liberia, landlords hold the vast majority of control.

â€œWe have spent just two months in the house and this kind of thing happened to us,â€ Dahn said. â€œRight now, I am not working and with my wifeâ€™s condition, I donâ€™t know what to do.â€

Superintendent Jerry Varnie of Margibi told The Bush Chicken that the news of the incident had not yet reached his office, but he promised to intervene, although he did not specify how.

Amos Zoe the head of the districtâ€™s disaster management committee, visited the scene a day after the incident and promised to be back with solutions but this has not happened.

When contacted, Zoe told The Bush Chicken that he has since reported the incident to Tilberosa Tarponweh, Margibiâ€™s first district representative.

â€œI went there and saw what happened and reported it to the old man [Tarponweh],â€ Zoe said. â€œOur response has been delayed because the old man is not well, coupled with the health crisis in the country, but we are working out something to get to them.â€

Dahn is now worried about how his family will manage as the country is under a state of emergency amid the COVID-19 pandemic.

â€œI am confused and I donâ€™t know where to turn now,â€ Dahn lamented. â€œI need help, I am calling on the government and all other humanitarians to come and rescue my family or else it is frustration that will kill us.â€

Responding to natural disasters is the responsibility of the National Disaster Management Agency. After each disaster, the agency is supposed to assess the level of damage and the number of individuals and structures affected in order to solicit and coordinate donations from partners.

However, the April 6 storm in Margibi was quite localized and the national agency did not make any major statements that suggested it would take any action. However, the agency said a â€œtorrential windstormâ€ that occurred the night of April 17 damaged approximately 300 houses in 6 communities and affected 4,000 people in Bong, Montserrado, and Maryland.

In response to the storm, the National Disaster Management Agency said the government had lifted a ban on building material stores operating to allow families to repair their homes. During the Coronavirus pandemic, there appears to be little appetite from humanitarian organizations to assist in non-COVID-19 related issues.