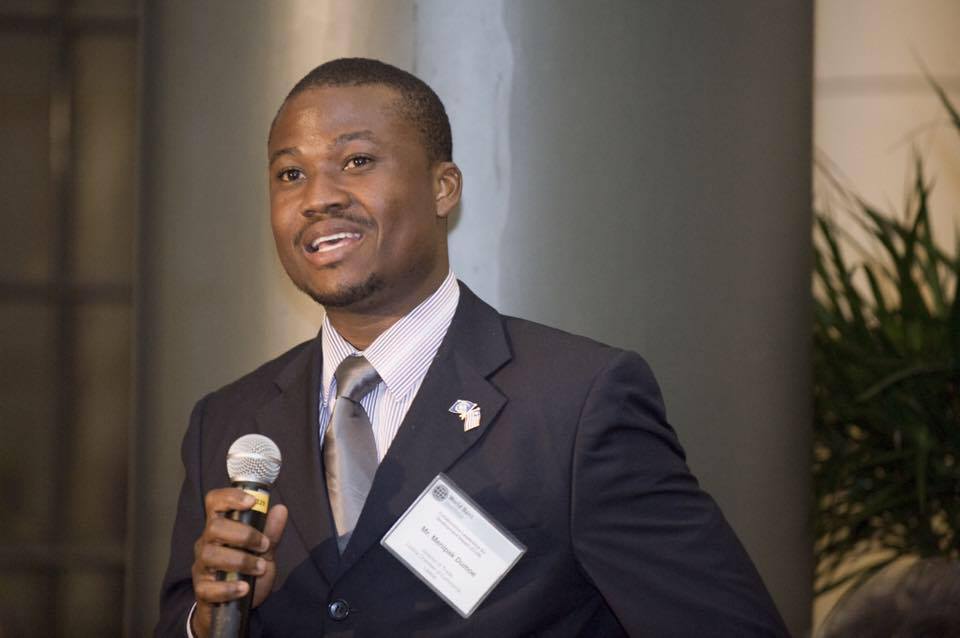 MONROVIA, Montserrado – The Liberian government has not yet charged the acting chairman of the Council of Patriots, Menipakei Dumoe, after he was arrested on Tuesday for a comment he wrote on Facebook.

“We don’t need free bags of rice. I say we the poor in Monrovia need AK47s so our leaders can take us seriously,” Dumoe wrote.

He was arrested after officials searched his home apparently for weapons, following a search and seizure order from the court.

Dumoe had clarified in subsequent Facebook posts that his call was for citizens to not just accept free rice that the government promised to distribute without questioning the system that had them living in desperate poverty. He also added that his statement should not be misunderstood as a call to violence.

“I am a non-violent political activist and will never call for the use of actual guns. Civil resistance is my M.O.,” he wrote, adding that the reference to the weapon was a metaphor, as the AK47 is a globally known symbol of resistance.

“Several national flags carry the AK47 symbol as a statement of resistance against oppression.”

However, the solicitor general and the government’s chief prosecutor, Sayma Syrenius Cephus, says the comment could undermine the peace and security of the state, and create fear among citizens.

Cephus also controversially claimed that Dumoe’s statement violates the state of emergency proposed by President George Weah. However, the president’s proposal that was approved by the legislature only limited freedom of movement and did not restrict or suspend any freedom relating to speech or expression.

“Menipakei Dumoe, for strange reason, decided to test our resolve. Today, it has been proven that his statement created fear and it is a campaign of terror and misinformation that clearly represents the fake and dangerous news I was taking about,” the solicitor general told journalists on Wednesday.

“This man decided to make a very reprehensible statement that tends to undermine the peace and security of the state. You can criticize your government but to give an order for a call to arms is very serious.”

The spokesman for the Liberia National Police, Moses Carter, told The Bush Chicken that Dumoe would be charged hopefully on Friday. Although it is unlawful to keep a suspect for more than 48 hours without being sent to court, Carter said Dumoe would not be held for more than the statutory time without being formally charged by the police.

“Usually, holidays and Sundays are not part of [the] 48-hours. We have not reached 48 hours yet,” he said.

Meanwhile, two lawyers have disagreed with the government on its arrest of the opposition stalwart.

Prominent human rights lawyer and president of the Liberia National Bar Association, Cllr. Tiawon Gongloe and former executive director of the Liberia Media Center, Atty. Lamii Kpargoi, both say the opinion expressed by Dumoe is covered under the freedom of speech or expression, guaranteed by Articles 14 and 15 of the constitution. They say he should not have been arrested by the government.

Gongloe told reporters on Wednesday that the government’s action grossly undermined the current fight against the COVID-19 pandemic, through diverting the attention of the public. He said the arrest of Dumoe also constitutes a violation of his human rights.

He further revealed that the government also did not follow the basic procedures of criminal law, which guarantees the accused’s right to his lawyer.

“Let the police and [National Security Agency] stop intimidating people for free speech because free speech is enshrined in our constitution and there [are] no limitations,” he said. Besides the constitutional protection of free speech, Gongloe noted that the Kamara A. Kamara Act of Press Freedom decriminalized speech when Pres. Weah signed it into law in 2019.

He warned the government against scaring away investors by disregarding the human rights of individuals and stop being selective in dispensing justice or intimidating people with descending views on issues.

Gongloe suggested that the government was being selective about who it investigated. In 2019, a former rebel general called for the formation of a Kru Defense Force and the arrest of Montserrado’s 10th district lawmaker, Yekeh Kolubah, without being arrested by the government.

Gongloe also noted that the chairman of the ruling Coalition for Democratic Change, Mulbah Morlu, had mentioned in a leaked audio recording that the president was offering government jobs for sex and using public funds for his personal benefit without being invited for investigation. Moreover, the president’s former nominee for a ministerial position at the Ministry of National Defense threatened to kill June 7 protesters. He was also not investigated for his comments.

Meanwhile, Atty. Kpargoi was concerned about the trajectory of the country, given the solicitor general’s justification for arresting Dumoe: “After watching that display, I can say with a heavy heart that there is no hope for Liberia for the remainder of the current government’s tenure.”

He added, “What even more horrified me was his mention of the arrest-release-and-immediately-re-arrest tactic that was favored by the apartheid regime of South Africa against its political opponents.”

He said such a tactic is nothing short of harassment and if law enforcement legally had such a power, no government will be required to take anyone to court for an alleged offence.

“They could simply arrest, release, and arrest the person in perpetuity. Such a scenario does not have and will never have a legal basis in any functioning democracy.”