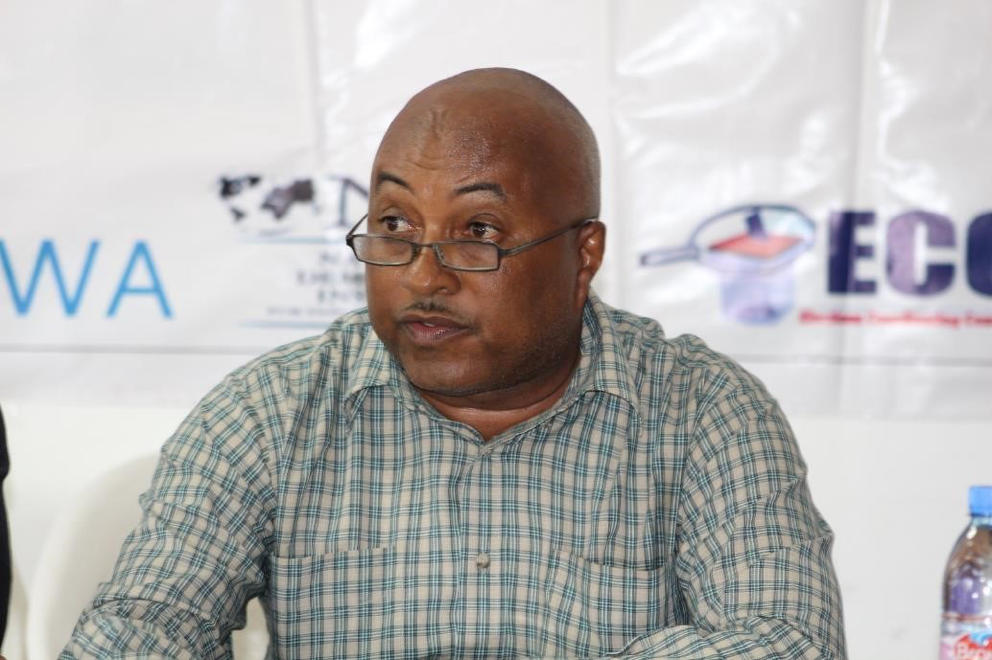 The ECC has called on the president to withdraw the nomination of Nwabudike and encouraged the Senate to reject his nomination if it is not withdrawn. Although the nominee, as a naturalized citizen, is not banned by law from holding the position, the consortium argues that â€œnot everything that is legal is expedient.â€

â€œIf he is successful in serving as the chairperson for NEC, he could sit as chief justice of the Supreme Court bench because there is no law that would prohibit it,â€ the group said in a statement.
The nominee has already served in two previous positions in the past year prior to being appointed as chairman of NEC â€“ as heads of the Governance Commission and at the Liberia Anti-Corruption Commission.

These previous appointments, the ECC said, are a clear demonstration of the presidentâ€™s closeness to the nominee, which raises questions about his neutrality and independence to head the agency responsible to manage the countryâ€™s elections.

â€œThe election management body cannot be seen as representing the interest of any particular political party. Elections are about people and the public needs to have trust in the election management body, which is a fundamental requirement for the peaceful outcomes of election processes. Liberians should not forget that the rigged elections of 1985 by Samuel Doe planted the seed for the 1989 civil conflict,â€ the statement added.

â€œWhile it is true that Cllr. Nwabudike is a naturalized citizen of Liberia, he is firstly a Nigerian citizen and this questions his loyalty to Liberia and therefore is not a suitable candidate to lead and manage a sensitive state institution like the NEC.â€

It is not clear whether Nwabudike still holds Nigerian citizenship or if he has renounced it.

Because the constitution limits the offices of president and vice president to only natural-born citizens, the ECC reasons that it is not morally prudent for him to preside over a commission that manages elections for the president, vice president, and other officials.

The ECC has also opposed the confirmation of Floyd Sayor as a member of the NECâ€™s Board of Commissioners and called on the Senate to also reject his nomination, for his controversial role played in the Montserradoâ€™s 15th district by-election in 2019.

Sayor, who headed the NEC data center during the by-election, disregarded his supervisorâ€™s instruction to quarantine a number of polling centers and also stop all counting processes of the votes cast in those centers until allowed at a later date. His action led to a re-run at several polling precincts.

The ECC also complained that the nomination of the new NEC officials lacked broad-based consultation with political parties and civil society organizations. Such consultation, however, is not required by law.

â€œWhile it is true that the president has the constitutional power to appoint commissioners of the elections management body, those on the commission should reflect the countryâ€™s political diversity and interests,â€ it said.

â€œElections can make and break emerging democracies like ours and sometimes they contribute to violent conflicts. Our peace is fragile and we must protect our growing democracy by making the right decisions, particularly when it comes to the nomination and appointment of individuals to manage and supervise the conduct of elections in the country.â€

The ECC has not been the only prominent critic of Presidentâ€™s Weahâ€™s appointments; the political leader of Liberty Party and senator of Grand Bassa, Nyonblee Karnga-Lawrence, also thinks that the nomination of a naturalized Liberian is a contradiction to a proposed amendment on dual citizenship the president submitted two months ago to the legislature.

According to Sen. Karnga-Lawrence, the presidentâ€™s proposed amendment that was passed by the Senate sought to grant dual citizenship to individuals born to both or one Liberian parent, with citizenship of another country. However, it provides that such individuals will not be appointed to certain positions in government because of their dual allegiance.

â€œToday, the president who placed this proposed amendment before us, has nominated, for our consent, an individual with obvious dual allegiances, a Nigerian-born citizen who was naturalized as a Liberian, to head the National Elections Commission of Liberia, a position of trust and magnitude that a natural-born Liberian, under the Weah amendment, would not be permitted to occupy, because of dual allegiances,â€ she wrote on her Facebook page.

She questioned Nwabudikeâ€™s allegiance to Liberia and also wondered why the president chose to give more rights to naturalized Liberians than natural-born Liberians with dual citizenship.

â€œIf dual allegiance is bad for natural-born Liberians, how can it be good for naturalized Liberians?â€ the Grand Bassa senator asked.

Karnga-Lawrence wondered if there were any special skills or unique competence required for the NEC chairmanship that the nominee possesses that no natural-born Liberian possesses.

She also called for a withdrawal of the nomination by the president and encouraged her colleagues in the Senate to reject him, if it is not withdrawn.