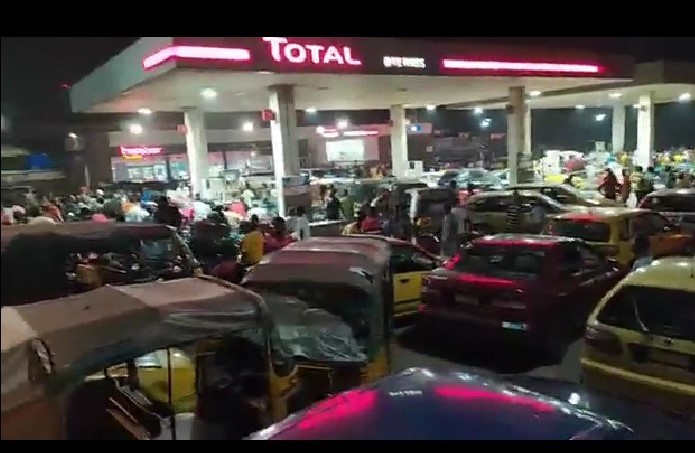 MONROVIA, Montserrado â€“ For the first time since the crisis began, the Liberian government has officially acknowledged that there is an acute shortage of gasoline in the country following weeks of denial and shifting blames. Across the country, fillings stations have run dry, and long queues of motorists have formed everywhere petroleum products used to be sold.

For more than three weeks now, the gasoline shortage has shown no signs of abating, and has already led to astronomical increases in the cost of transportation and other essential commodities which depend upon adequate and affordable supply of gasoline.

Due to the scarcity of the product, many gas stations have began rationing what little products they have, and have limited the quantity that any one customer can purchase at pump price. The gas stations have also limited their service to the public only to morning or evening hours, leading many customers to camp overnight in extremely long queues.

Traffic congestions, broken-down vehicles, and unending queues are now staple scenes across Monrovia. Even the vehicle of Chief Justice of the Supreme Court, Francis Korkpor, has been reportedly sighted queueing up at a filling station in the hope of getting gasoline.

If the fuel shortage has reached a crisis level in the capital, Monrovia, it is not hard to imagine how severe it is in other parts of the county that depend upon supplies from Monrovia. Commercial motorists in Buchanan, Grand Bassa for example, have staged strikes and blocked major roads and highways demanding to be supplied.

Concerned members of the House of Representatives on Feb. 4 cited both the minister of commerce and industry, Wilson Tarpeh, and the managing director of the Liberia Petroleum Refinery Corporation, Marie Urey Coleman. At the time, both officials denied that there was a shortage of petroleum on the market, insisting that new restrictions introduced by APM Terminals, the firm currently managing the port, was what made it difficult for larger petroleum importers to offload supplies as the port, therefore leaving smaller importers, and eventually consumers, without gasoline.

According to Coleman, â€œTotal [a large petroleum importer] stores its products at our Cornex Terminal. We have enough of the products at the Cornex Terminal, but for Total to supply the smaller suppliers, it has turned into an economic issue.â€

But assurances by Coleman that there is sufficient gasoline in the country did not match the constant scenes of chaos playing out at filling stations, which have essentially paralyzed normal activities in Monrovia and elsewhere.

Coleman, like Tarpeh, insisted the new rules by APM Terminals limited docking and the use of storage facilities only to very large importers, due to ongoing maintenance at APMâ€™s offloading and storage facilities. The situation, she said, resulted in supplies for February being delayed beyond its scheduled delivery date of December.

In his remarks, Minister Tarpeh also placed the blame at the feet of major importers who he said failed to bring in the full quantity of petroleum products needed to meet long-term market demands.

â€œWe noticed that the amount of order of petroleum that was supposed to have been in the country did not come in. We have been working together â€“ LPRC and major importers [like] Total to resolve the issue. They will now help to supply other smaller importers in order to reduce the queues. We have diversified the little quantity available at other smaller stations so that this situation will come to an end.â€

Only on Monday, February 10, however, did the GoL concede to the fact that indeed there is a fuel shortage, which has resulted in disruptions in major activities around the country.

In a press statement made on Thursday by Information Minister Lenn Eugene Nagbe, the government expressed empathy with the general public and sought to ease public concerns by announcing that emergency supplies of petroleum are being purchased from neighboring countries, and will be in the country within a week.

According to the minister, â€œ[The] government treats the constant availability and supply of petroleum and other essential commodities on the market with utmost importance.â€ He sought to assure the public of a swift resolution to the gasoline crisis.

A special six-man presidential task force has been constituted to probe the real causes of an estimated 60 percent discrepancy between what importers’ inventory show, and the actual quantity of products available at the governmentâ€™s storage facilities at the Liberia Petroleum Refining Company, or LPRC.

Headed by Trokon Kpui, the minister of state without portfolio, the taskforceâ€™s mandate is to review three years of petroleum management from Jan. 2017 to Jan. 2020, after which, a detailed report determining the causes of the discrepancies and the wider crisis will be made to the president. He is then expected to institute corrective measures to avoid future recurrences.

More importantly, Nagbe said, the Ministry of Commerce and LPRC have been mandated to work with importers to ensure that the limited stocks available are distributed properly in order to ease the shortage. Nagbe appealed to the general public to be calm and exercise patience as the government works to resolve the situation.

In the streets of Monrovia and across the country, however, motorists and ordinary citizens continue to be outraged that such public negligence has resulted in major disruptions in their everyday lives.

Martha Collins, a businesswoman in Monrovia, told The Bush Chicken that the governmentâ€™s denial of the situation caused more harm to the population.

â€œImagine how our businesses have been impacted in an already bad economy. Yet, the government said no shortage existed. Why now are they announcing to provide emergency solutions?â€ Collins said.

â€œOur government continues to live in denial, even if we know they donâ€™t have quick solutions.â€

A commercial driver in the Paynesville area, Arthur Nimely, also expressed frustration, suggesting a deliberate attempt by the government to deceive the public about the real causes of the gasoline shortage.

â€œI am just feeling really bad for our children who are in school and travel to far distances on motorcycles and other commercial means of transportation,â€ he said, suggesting that schools should be closed until adequate fuel supplies arrive in the country.

The chairman of the Department of Mass Communication at the University of Liberia, Euriah Togar, has also added his voice to the chorus of disappointment. But he encouraged the government to take responsibility for the crisis, apologize to members of the public, who are the principal victims, and seek a swift resolution in order to restore public trust.

Already, allegations are rife as to the actual causes of the crisis, as some citizens who spoke on conditions of anonymity accused the government of corruption in the petroleum sector. Given the recent history of special presidential task forces and their various reports, there is little confidence that the real cause of the crisis would be uncovered, or that anyone would be held accountable.

The most significant effect of the crisis is not how much potential revenues the government is likely to lose. Instead, it is the cost to ordinary people and the larger economy that three weeks of disrupted commercial activities can have.