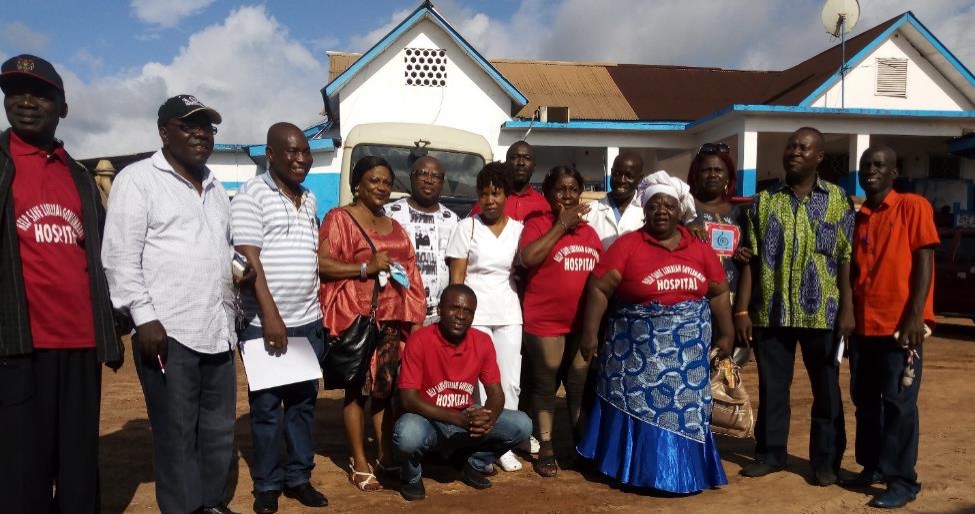 BUCHANAN, Grand Bassa â€“ Ordinary Grand Bassa citizens have come together to present a cash donation of US$3,880 to the Liberia Government Hospital in Buchanan.

Operating under the banner of the â€œHelp Save the Liberian Government Hospital Campaign,â€ the group presented the money after the hospitalâ€™s medical director, Abraham Jawara, had appeared on a local radio station in Buchanan asking for help with resources for the government-funded hospital.

The facility, which also caters to patients in River Cess and Sinoe, has had many of its departments closed after it was gutted by fire two years ago.

Jawara disclosed that while the re-electrification of the hospital was completed, funds were still needed to reopen essential departments and purchase drugs, fuel, and other medical supplies.

He said the opening of the hospital for full operation was not possible in the absence of the citizensâ€™ contributions.

Prior to presenting the amount to the hospitalâ€™s administration on Wednesday, the secretary of the campaign and also the manager of Magic FM in Buchanan, Christopher Yarwoe, said it was Jawaraâ€™s call that gave birth to their initiative.

â€œThis was one of the reasons that prompted the community radio station owner to use his public outcry to create a perfect platform for discussion to get collective views of the citizens and residents about the situation of the hospital,â€ Yarwoe said. â€œThis is one of the roles of the community radio station to promote development and social change.â€

He said the launch of the campaign was also motivated by the death of a 25-year-old woman who could not access medical care for retained placenta after giving birth in her village, because the hospital did not have the capacity to fuel an ambulance to get her to the facility.

Additionally, Yarwoe referenced a tragic motor accident that occurred on September 3 at the Benson River bridge near Buchanan and led to the death of several passengers â€“ many of whom died because they could not access quality healthcare in time.

â€œThe wave of economic crisis in the country now is like the wave of the ocean.â€

He said it was for these reasons and other challenges, such as the lack of fuel, medical supplies and drugs, that citizens deemed it necessary to immediately organize themselves into a group to solicit support for the hospital.

She said already, the committee has received a one week operational budget from authorities of the hospital in the amount of US$2,455, to cover operational expenses, including fuel for the generator and ambulance and meals for patients.

â€œBased on the pressing need of the hospital since it got reopened on Saturday, October 5, 2019, the committee to help save the Liberian Government Hospital has decided to give two weeks support to the hospital,â€ Karnga said.

â€œThe committee is pleased to present an initial amount of US$3,880 to the hospital on behalf of the citizens and residents of the county.â€

Karnga said a wide array of individuals contributed to the initiative, including government officials, and religious, tribal, and sectional groups. She praised the citizens and reminded those who have not yet fulfilled their promises to do so as soon as possible. She also disclosed that her committee would make a full report on the amount collected on Sunday, October 20.

The committee appealed to the Health Ministry to allow the public hospital to collect minimum service fees in order to use those funds to procure essential drugs and for the upkeep of the facility.

The citizens also recommended that the government put in place a strong monitoring system at the facility, and called on other citizens to aid in the monitoring process.

Meanwhile, Jawara, who received the donated amount on behalf of the hospital, thanked the committee for its initiative.

â€œThis donation comes at the time the hospital is in dying need of medical materials to enhance the ongoing work of the hospital. So, we want to say to the committee that this initiative undertaken by the citizens is laudable and in the right direction,â€ he said.

He said the management and staff of the Liberian Government Hospital were proud of citizens of the county for their initiative.

He encouraged other counties to emulate the good example of Grand Bassa in strengthening their health systems, as the central government struggles to provide budgetary allotments for the smooth operation of public facilities.

He also called on the central government to release the hospitalâ€™s allotment, noting that the contribution made by the citizens could not entirely run the hospital.

â€œWe also want to sound a clarion to the Ministry of Finance. We have been running up and down to get our allotment. Up to yet, we have not gotten any signal of getting our allotment,â€ he said.

â€œWe are committing ourselves to work, and equally so, we are expecting government to commit herself to what is due us.â€