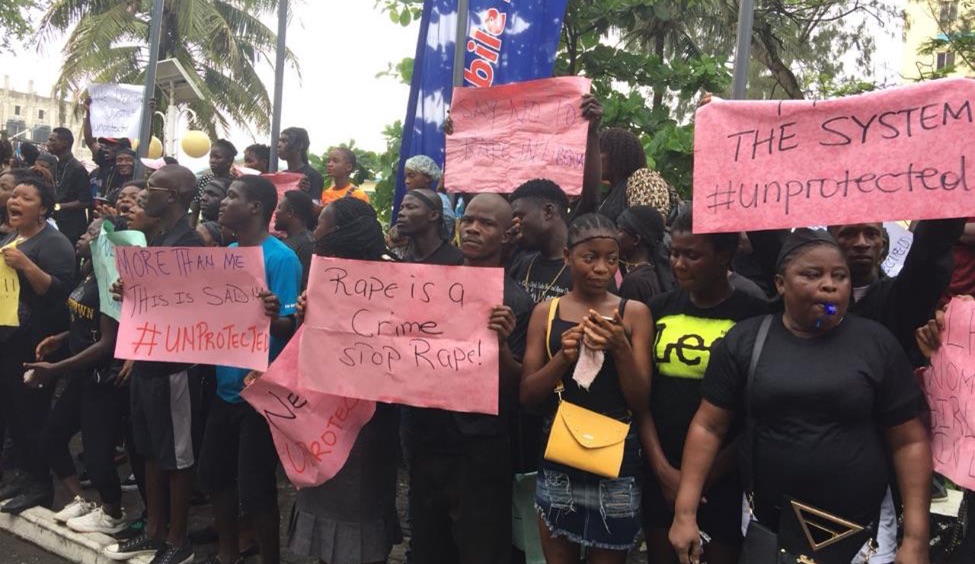 The Liberia Feminist Forum, other women and human right groups in Liberia are concerned over the rise in reported cases of rape, sexual abuse, forceful initiation, cruel public torture, and other forms of sexual and gender-based violence, harmful traditional practices and injustice against women, girls and other marginalized groups in Liberia.

We are once again calling on the Government of Liberia and its mandated institutions (i.e. Justice, Gender, Internal Affairs, Education, etc.) and relevant stakeholders to recognize that sexual and gender-based violence is a violation of the fundamental human rights of women and girls in Liberia.

Failure to act on SGBV as a national priority is consequently facilitating the tragedy, we continue to face each day and every week with media reports of violations, abuse, and trauma faced by women, girls and marginalized persons across the country.

The prevalence of violence against women and girls in our society is enabled by the culture of impunity and a sociological imperative that says women and girls must suffer rightsâ€™ violations as casualties of societyâ€™s stability, peace and security. We continue to see womenâ€™s rights and SGBV as donor issues rather than engage on SGBV a national development priority; hence the lack of accountability and investment in the access to justice system.

It, therefore, remains our clarion call that the Liberian government uses its role and responsibilities as enshrined in our constitution and national laws to invest and enforce a non-negotiable position on women rights and gender equality in Liberia.

In 2019, in just three months (January-March), there were 803 cases of SGBV reported by the Ministry of Gender, Children and Social Protection (June 2019 Press Briefing) of which about 82 percent were rape/sexual assault including gang rape cases.

This is just in three months. While we can attribute the rise in cases to increased awareness of rape and SGBV and utilization of the national referral pathway program, we are also aware that the data represents an underreporting of cases, given that most cases reported are of minors (representing more than 90 percent).

As such, the data does not fully account for sexual violence and abuse perpetrated towards young and adult single women, married women, and women directly intimidated or lacking economic independence and/or perceived threats and stigmatization prevent them from coming forward or pursuing their cases.

We are also aware that criminalization and discrimination against persons of different sexual orientation and gender identity prevents many men and boys, especially as survivors, from reporting their cases and accessing much needed social services.

We are even deeply troubled that recent media reports of the tragic loss of lives of young women, such as the late Odell Sherman, not only highlight the continuing terror being faced by thousands of women and girls but how the gaps in the justice system deny and impede access to justice for victims, survivors, their families, and their communities. Of the 803 cases reported, only 9.5 percent went to court and barely five cases saw convictions. Majority of perpetrators (about 72 percent) had yet to be arrested!

It is also important to state within our analysis of the current context, our position as the Liberian Feminist Forum given how often calls for accountability and justice shift towards feminists and women rights activists, seeking our outrage rather than the government as the primary duty bearer.Â  â€œWhere Are the Feminists?â€ â€œWhat Are the Feminists Saying?â€ â€œWhere is their Outrage?â€

The Liberian Feminist Forum was established in 2014 with the overall goal of advocating for the transformation of all social relations of power that exploit, oppress, and marginalize any set of people. As such, the LFF provides critical feminist positioning on human rights issues in the country, challenging patriarchal gender and social norms, beliefs, and practices in the Liberian society that threaten the rights of women, girls and marginalized groups such as sexual minorities and women living with HIV and AIDS.

We do this through advocacy, knowledge production, and movement building, leveraging opportunities to advance the full realization of the rights of women, girls and persons marginalized because of their gender, ethnicity, health status, sexual orientation, etc. In line with our feminist analysis, we take an unapologetic and political stance with survivors and solidarity with families of victims of rape and other forms of SGBV in pursuit of access to justice. Our actions, analyses, and work, however, do not negate nor shift accountability on SGBV to the very people demanding an end to the systematic marginalization, oppression, and violence.

Since 2017, LFF and women and human rights groups have mobilized against the attempts to circumvent access to justice such as the attempted rape law amendment and repeatedly called on the government to fix the justice system.

Prior to that, LFF and women and human rights groups organized and advocated for the passage of key legislation such as the Domestic Violence Bill, gender parity, criminalization of female genital mutilation, violence-free education for girls, and access to stigma free sexual and reproductive health rights and services.

These actions were to ensure a stronger legal framework and adequate mechanisms in place to reduce vulnerability to SGBV in Liberia. More recently, mobilization around the Times Magazine and ProPublica â€œUnprotectedâ€ report on sexual abuse at More Than Me Academy reinforced our position on the critical need for improving the justice system to protect Liberian women and girls from violations in the first place.

For the last eight months (beginning October 2018), LFF and women and human rights activists have worn black on Thursdays in continuation of our protest demands on the state to conduct a full independent investigation, institute measures such as a national policy across private and public institutions for the prevention of sexual exploitation and abuse.

With the release of the Local Advisory Board Panelâ€™s commissioned report affirms our concerns, we remind the government to review our demands and take actions to ensure accountability for survivors, students and their families as a result of the gross failure of More Than Me and its leadership in protecting their students from SGBV.

The most recent media report on Soltiamon Schoolâ€™s punishment and abuse meted against a female student, unfortunately, becomes another terror we encounter as a result of lack of attention to our demands.

While we remain resolute in our calls for justice and an end to SGBV in Liberia, we would like to state categorically that the Government of Liberia remains the primary duty bearer accountable to protect its citizens, prevent violations of rights, and ensure access to gender-responsive, timely and unbiased justice when rights are violated. We, therefore, once again, call on the government to do the following as our comprehensive demands to address SGBV as a national priority. SGBV cannot be the norm in Liberia and we can not continue to witness the continuum of the denial of rights, dignity, and humanity of women and girls in Liberia.