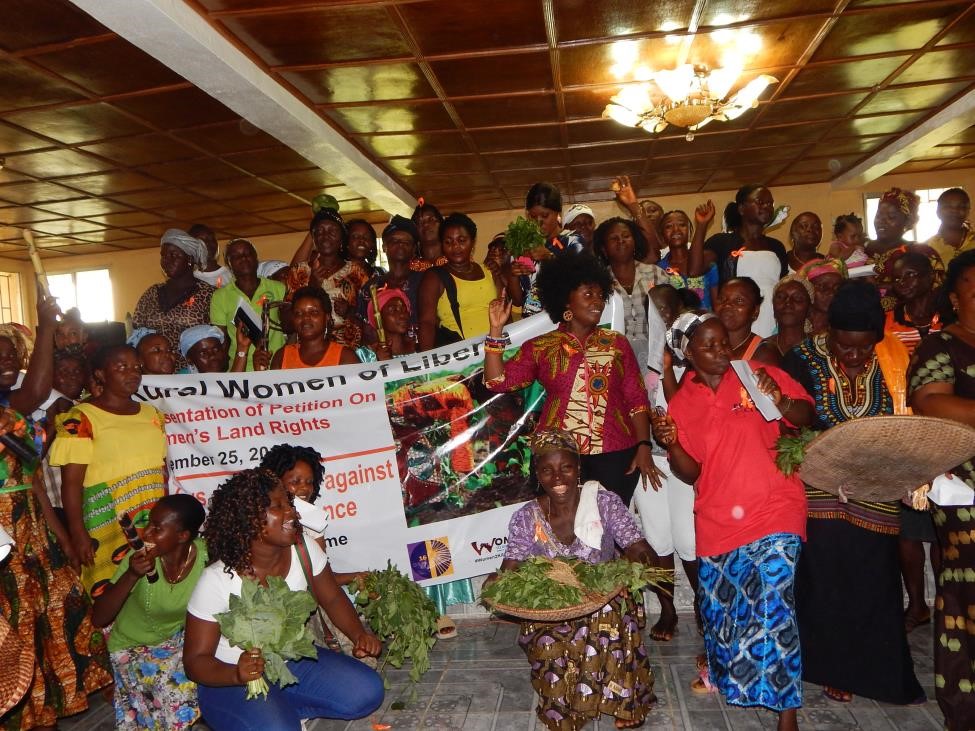 BENSONVILLE, Montserrado â€“ Amid the celebration of the UN Women-led 16 Days of Activism, a group representing rural women in Liberia has presented a list of demands for increased access to land rights.

The demands are contained in a charter that was drafted at the Kilimanjaro Initiative held in Tanzania in October. At the October conference, African women, including Liberiaâ€™s Marie Clarke, climbed the peak of Mount Kilimanjaro as a symbol of advancing their voices in demanding their rights. On November 25, Liberian women presented the charter to the government of Liberia through Montserradoâ€™s superintendent.

The women presented the charter, which demanded that women be empowered by enabling them to access their land rights, technology, and financial resources to improve the livelihoods of their families. The women also called for 50 percent participation of women in decision-making bodies.

Additionally, they drew attention to the environmentally harmful practices of investors and businesses and asked that the government better regulate corporate interests to avoid adverse effects on the environment and the health of communities, especially women and children.

â€œWomen and communities must have a say on who and what kind of investment and companies that invest in their communities,â€ the charter read. â€œThe investor must be obliged to provide information about the impacts of their investment; sustainability- economic, environment, health, social and infrastructure.â€

The women also recommended that the government conduct civic education on land laws to enable women to understand their rights.

Presenting the charter, the executive director of the National Empowerment Program, Sianeh Omeze, called on Montserradoâ€™s Superintendent Florence Brandy to add her voice to the women in engaging the government on the implementation of their demands.

While she said some achievements have been made in advancing womenâ€™s voices, Omeze said Liberian women still were still not fully considered in decision-making.

â€œWe hope that we as women will work to ensure that all the demands contained in this charter would be accepted and implemented so that those women who risked their lives to climb Mount Kilimanjaro voices will not go unheard,â€ she said. â€œWe will be making follow-ups in a period of one year; if weâ€™ll have to go back to climb the mountain again because our demands are not being considered, we will.â€ Receiving the charter, Brandy assured the women that because the minister of gender is a woman who believes in the rights of women, their petition would be considered. â€œIf it is not hundred percent, maybe 60 percent,â€ she said.

She, however, noted that the process would involve a bureaucracy of chain of command.

Brandy thanked Clarke, who is the first Liberian woman to climb Mount Kilimanjaro, and promised that the president would meet with her.

The acting chair for the local chapter of the Kilimanjaro Initiative, Leona Fatoma said she was overwhelmed with excitement over the formal presentation of their demands. She expressed hope that their voices would be heard and considered.

Meanwhile, the country director for ActionAid Liberia, which sponsored the event, said the presentation of the charter to the government is a fulfillment of the wishes of most rural women.

Lakshmi Moore praised the women for championing their own cause.Â  She said ActionAid was only facilitating the works of the women, adding, â€œIt is you all the commendations must go to. We are nothing, but you are the one doing the work.â€ The event was organized by the National Empowerment Program in collaboration with the Liberia chapter of the Kilimanjaro Initiative.

The idea of the initiative was conceived in 2012 during a meeting of rural women and civil society organizations in Dar es Salaam. It aims to create space for rural women to participate in decision-making surrounding land and natural resources.