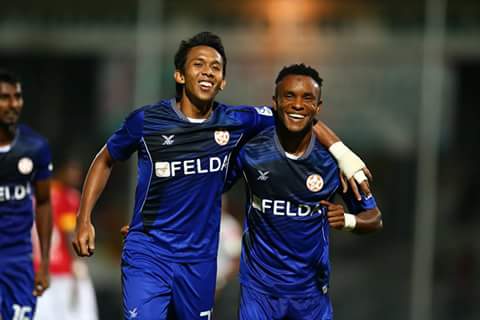 While playing away, AEL took the lead when Polish striker Arkadiusz Piech scored in the 64th minute. Then, Nea Salamis leveled the scoreline in the 75th minute through the Croatian Iva Curjuric. However, Nea Salamisâ€™ hopes of winning came down crashing when Mathieu Coutadeur found the back of the net later in the game. Grimes made his 20th league appearance in the game,

Nea Salamis remains in the sixth position with 31 points from 24 matches.

Midfield maestro, Weeks made his 17th league appearance for Ermis in their disappointing 2-1 loss to the seventh placed Doxa. Two first-half goals from the Brazilian, Paulo Roberto Teles Goes Sobrinho and Togolese Akoete Einful were enough to hand Ermis their second successive defeat. Ermisâ€™ only goal came in the stoppage time of the match through the Guinean Alhassane Keita. The defeat drops Ermis to 10th on a 14 team table with 24 points from 24 games.

Patrick Ronaldinho Wleh continued his scoring streak after registering his name on the scoresheet as his club Selangor got an easy 2-0 victory away from home. The Liberian opened up the scoring in the 69th minute before Malaysian forward; Abdul Hadi Yahaya wrapped up the score in the 77th minute.

Selangor will meet Royal Malaysia Police Association Football Club in the third round.

Francis Forkey Doe continues to impress at Felda since he joined the club a week ago. The right footed striker was on the scoresheet in his debut match during the week and again registered another goal as Felda got a 2-0 home victory over Ipoh FA. Felda will meet the former employer of Patrick Wleh, PKNS FC in the third round.

Eric Weeks’ club Perak bounced back from their 1-0 defeat to Selangor during the week with a 3-1 win over Sawarak FA in the FA Cup. Though Eric failed to register a goal; he helped create the first and second goal.

Perak will host Pahang FA in the FA Cup third round.

In South Africa, skipper Anthony Snothi Laffor made his return to Mamelodi Sundowns’ squad against Golden Arrow, a match that ended goallessly. Laffor was introduced in the 46th minute when he replaced Colombian attacker David Leonardo Castro CortÃ©s.

Sundowns remains on top of the Premiership table with 46 points from 20 games, seven points ahead of second place Bid Vest Wits.

Kpah Sherman had the most disappointing weekend after being red carded in a match where his club Santos managed a 1-1 draw at home with Amazulu.

Amazulu took the lead through Nomvethe, who converted a penalty given in the 65′ after Yusuf Parow handled the ball. However, Santos took a share of the points after getting the much need equalizer through Mhlengi Sgwebele in the 75th minute before Sherman got his marching orders after receiving his second bookable offense.

Santos remains in the 10th position of the South African first division with 22 points from 20 matches.

Jordan base Liberian duo, Teah Dennis and Marcus Macauley of Al Ahli, missed out the chance of going on top of the league table after a 1-0 defeat to That Ras Football Club.

The defeat drops Ahli to fourth on the league table with 24 points, two less than league leaders Al Whedat.

Striker William Jebor played all 90 minutes but was unable to help his team Ponferradinha from suffering a 3-1 home defeat to Cordoba.

The defeat extended Ponferadinha’s poor run of form this season. The club is yet to get a win from their last eleven matches.

Following their 3-1 lost at home, they sit 16th on the Spanish Segunda table with 28 points from 26 games.

Tonia Tisdell made his third league appearance for his new club KarÅŸÄ±yaka in their 2-1 lost to 1461 Trabzon in the Turkish Lig 1.

KarÅŸÄ±yaka drops to the bottom of the table with just 17 points from 22 games.

In Greece, Herron Berrian’s club Panserraikos played to a goalless draw away at Agrotikos Asteras.

Berrian has managed to score once from 16 appearances this season.

Panserraikos are now seated 10th on in the Greek second tier league with 25 points from 17 games.

Van Dave moved to Diambars earlier this month but yet to make his league debut for the club.

Diambars moved second from bottom on the table with 14 points.