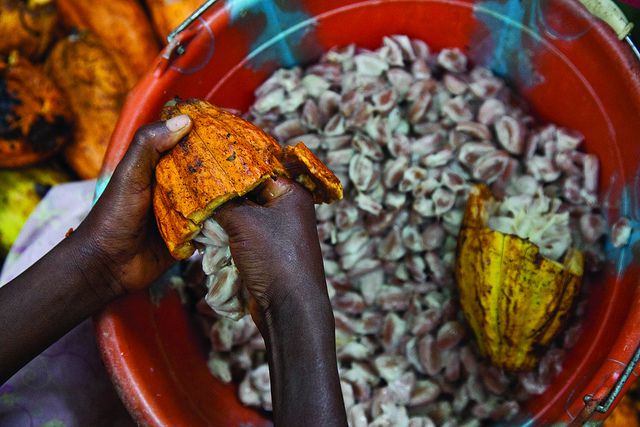 GANTA, Nimba County – Jerry Klee was given a chance.

Jerry Klee Sr. faced a dilemma when he realized he did not have enough money to put all six of his children through high school and college. He knew he needed a loan, but microfinance institutions in Liberia do not offer loans of substantial amounts. Additionally, commercial banks would require him to put up collateral that was worth more than the amount he needed in addition to charging expensive interest rates. That was not an option for Klee. Luckily, he was able to join a credit union and get the money he needed. Klee says that he was also able to establish a clinic (Power House Clinic) with financial assistance from the credit union. Additionally, he secured a farm where he now plants rubber, oil palm, and cocoa.

“I don’t want to imagine what it would be like to educate my own six children, and other extended family children I am now sponsoring in school at this time of financial constraint,” Klee said on the value of credit unions. He continued, “This credit union is my life, and I can do nothing financially without it.”

Plenseh P. McCoy, the owner of Faith Institute of Beauty Therapy, a beauty salon in Ganta, expresses a similar sentiment. She attributes the current success of her business to the loan she received from the credit union. Her business was already in operation when she requested the loan, but she used it to expand and upgrade her services. She noted that the help was very much needed, especially considering that she is a single mother with multiple children.

The Value of Credit Unions

In the past few years, credit unions have been making a resurgence in Liberia, and there is a strong need for their services. Unlike commercial banks that seek to profit from customers in order to benefit the shareholders, credit unions are cooperatives. Their clients are also owners; for this reason, all profits go to the customers. Therefore, credit unions pay more competitive dividends and interest rates on ownership shares and deposit savings accounts. Return rates for savings accounts are among the highest available options, ranging from 3 – 5 percent. In contrast, the average return rate for commercial banks is 2%, according to a Central Bank of Liberia report.

Loans from credit unions also have much fewer restrictive requirements for collateral. According to Wuo Jacobs, the chairman of Manakaoryee Gbundeamun Credit Union in Ganta, securing a loan is as simple as demonstrating good character and finding another member who can guarantee the loan. He went on to say, “your savings and the saving of your guarantor are just enough to secure you a loan in the credit union.” It is worth noting that the credit unions limit the loans they provide to the total amount of savings of the loan requestor and the guarantors.

Low-income earners and people in the rural communities are the primary clients for credit unions, as a majority of bank locations (48) are in Montserrado. The remaining 34 are spread thinly across ten counties. Four counties – Gbarpolu, Rivercess, River Gee, and Grand Kru – do not have any bank branches.

The existence of credit unions as viable financial services providers was certainly not the case a few years ago. After the civil war, few credit unions still operated, but they struggled with problems that hindered their abilities to provide members with adequate service. The agency that regulates credit unions, the Liberia Credit Union National Association (LCUNA), observed that there were countless incidents of mismanagement of funds by union leadership. LCUNA’s  2011 survey  estimated that on average, credit union managers pilfered 80% of returns intended for members. Furthermore, they observed that 90% were not audited. Many managers also did not have formal training specific to the industry.

The Meeting to Revise the Credit Union System

In 2011, a few volunteers within the credit union industry resolved to address these problems. Their goal was to bring the sector to international standards in a way that could help improve living conditions through the access to quality financial services. A formal meeting took place in Ganta, Nimba County from June 16-17 of that year.

Twenty-eight representatives from 22 primary credit unions representing eight counties participated in the meeting. LCUNA organized the gathering, in collaboration with the Central Bank of Liberia (CBL). Representatives from the Cooperative Development Agency (CDA), the United Nations Capital Development Fund (UNCDF), and the World Council of Credit Unions (WOCCU) were also present at the meeting. The result of the meeting was a national strategy to bring Liberian credit unions up to international standards and practices.

To ensure the achievement of these goals, LCUNA and its local and international partners would audit each credit union every three months and the end of operating terms. These organizations were also required to have a change of leadership after every operating cycle and make updates to their policies as needed.

The country was also divided into four regions by LCUNA for easy access and conduction of activities. The regional headquarters can be found in Tubmanburg, Buchanan, Ganta, and Zwedru. The MasterCard Foundation, along with the United Nations Capital Development Fund (UNCDF), donated USD 2.45 million for the construction of the headquarters. Those headquarters, when completely built and staffed, would also serve as four larger regional credit unions.

There were 350 credit unions operating under the umbrella of LCUNA in all 15 counties by the end of 2013. Their proliferation will contribute to reducing poverty as it will provide members with a way to earn interest on their savings. Already, credit unions have a substantial membership base. LCUNA’s managing director, Yarkpazuo Bussieway, estimates that there are 22,000 credit union members in Liberia, of which 60% are women.

The industry is now working to lure more people to use credit unions as opposed to just village saving loan associations, since those organizations are limited in the services they can offer. Furthermore, the Ebola outbreak set back the movement to modernize credit unions. Much of the work of LCUNA and WOCCU was halted as staff had to be evacuated and an Ebola sensitization campaign was launched. With the end of the outbreak on the horizon, the credit union industry may be on for the rebound.

Featured image courtesy of Bread for the World