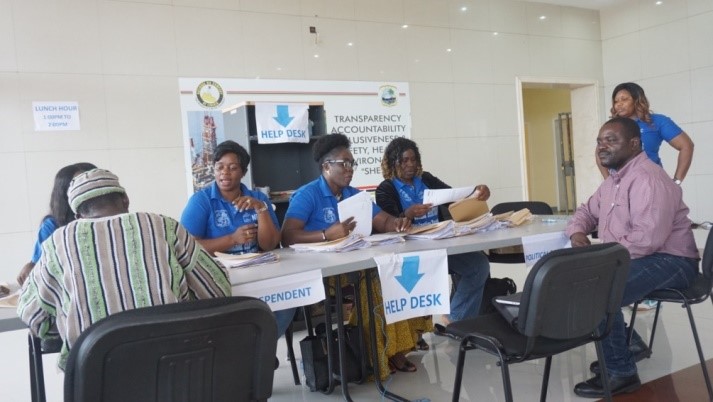 PAYNESVILLE, Montserrado â€“ The gender equity requirement in the elections law appears to have no consequences as no political party has met the 30 percent threshold set and the National Elections Commission has said it will not penalize the parties.

But according to NECâ€™s July 14 release of the Progressive Provisional Listing of Candidates accepted from 19 of the 26 registered political parties, none of the parties met the required threshold. There are only 123 females out of the 783 candidates accepted by NEC so far. While the total number of female aspirants may still change during the closing of the nominations process, it is unlikely to shift by much.

The nomination of candidates began on June 19 and will on July 21, 2017, after it was extended for an additional ten days.

NEC said the decision to extend the nomination period for candidates was reached in an emergency Inter-Party Consultative Committee meeting of 36 participants including international partners held with registered political parties.

â€œThe reliance for the extension was rooted in solidarity to female candidatesâ€™ participation in the election process in relation to the 30 percent gender balance and political partiesâ€™ requirement of feeding no more than 50 percent of candidate seats up for grasp,â€ a press release by NEC read. Henry B. Flomo, NECâ€™s director of communication, said though the Amended Elections Law of 2014 states that political parties should endeavor to ensure that the governing body and its list of candidates has no less than 30 percent of its members from each gender, the commission cannot enforce the rule because according to him, all parties needed to do was to show that they were trying to ensure that they met the threshold.

Flomo said several political parties could not meet up with the minimum requirement of 30 percent gender balance and had explained their situation to NEC. NECâ€™S director for communication, Henry B. Flomo, says NEC would not impose penalties on political parties not meeting the gender requirement as long as they Â Photo: Zeze Ballah

According to McGill, CDC, which had only 12.96 percent of females on their tickets, faced many challenges in getting women to contest positions but CDC â€œdoes not know the reason for which females are not coming forward to participate in the elections.â€

McGill explained that CDC allotted several vacancies to women on the partyâ€™s ticket to contest, pointing out â€œthe problem is not with the CDC but rather the women that are not showing any interest to contest the elections.â€

He said CDC has done everything possible to have more females contest on the partyâ€™s ticket but to no avail. He said a â€œmajority of the women were contesting the partyâ€™s primary in one cluster district, which could only be won by one person.â€ Nathaniel McGill, chairman of the Coalition for Democratic Change, said the coalition has done everything possible to have more women contest the partyâ€™s seats but do not know why these women are not making themselves available, Photo: Zeze BallahÂ

Jacob Smith, the secretary of Liberty Party, told The Bush Chicken via mobile phone that the party made several efforts to increase the participation of females but frustratingly they are not showing any interest.

According to Smith, Liberty Party submitted a communication to NEC explaining that it indeed endeavored to ensure it met the 30 percent threshold of gender balance but could not.

He said about 15 seats in several districts in Lofa, Bassa, Nimba, and Gbarpolu were exclusively set aside for females, noting that â€œmost of them did not express their interest in contesting the elections on the party’s ticket but rather chose to become independent candidates because of the advice from their supporters.â€

Smith maintained that Liberty Party will have to stop where it is now in terms putting forward female aspirants, adding that â€œthe law is not mandatory on political parties to have 30 percent gender balance but that they should endeavor to ensure â€“ which the party did.â€

Lavala Beyan, acting chairman of the Grassroots Democratic Party of Liberia, which was the fifth worst performer in terms of representation of women, also said the females that have expressed interest in contesting on the party’s ticket are not registering because of financial constraints.

â€œThe party does not have the money to give to these females,â€ Beyan said.

He said the current number of female aspirants approved by the party is likely the furthest the party will go because the Grassroots Democratic Party cannot do more than its best.

In July 2016, a group of women under the banner the Consortium of Women Political and Civil Society Organizations urged NECÂ to ensure that political parties complied with provisions of the Amended Elections Law of 2014, which calls for increased gender participation in political parties in Liberia.

The Consortium, in their statement presented to NEC, said political parties as the primary mechanisms through which elective offices are accessed should create opportunities for women to be elected to key elective positions within them and the society.

To this effect, the women said the Commission should require all political parties to comply with Section 4.5 of the Amended Elections Law.

The women in their petition argued that even though Section 4.5 of the Amended Elections Law calls for equity in gender representation in the governance of political parties as well as candidacy for elections, the executive governing structures of many political parties are dominated by men, while women are consigned to womenâ€™s wings and caucuses.

In the quest to promote gender equity in governance, the elections law would have been a fast way to increase the representation of women in the legislature. But the law has no penalties for the political parties and comes off more as a suggestion.

The other notable effort to increase womenâ€™s participation in the legislature proposes adding an additional five seats reserved exclusively for women. If that bill were passed, assuming that the current level of 11 women in the 103-member legislature was maintained, the additional five women would only increase the percentage of women from 10.7 to 14.5 percent but would cost over US$1 million each year. If the existing law had penalties, it would likely cost nothing and increase the number of women much more drastically.