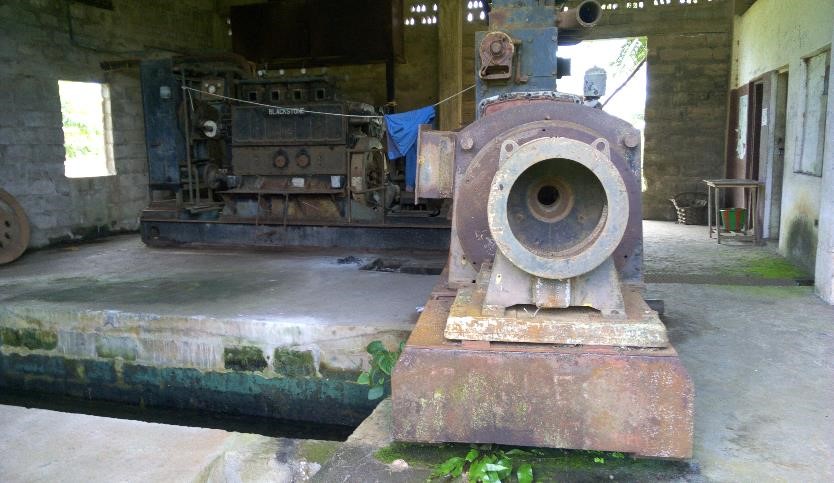 CESTOS, River Cess â€“ Before the civil war, River Cess operated its own power plant to provide electricity to residents of Cestos and its surrounding areas, but the power plant was looted during the 14 years of civil crisis.

As a result, for more than 20 years now, Cestos has been without electricity. Portable gasoline generators and torchlights are the main sources of power. A few commercial providers exist but very few residents can afford to pay the price of US$50 per amp.

Although the machine is capable of providing electricity for more than 700 households, yet the county capital remains dark at night.

In October 2016, assistant superintendent for development Ruth Sawmadal told The Bush Chicken that a project to erect cement poles before reconnecting the generator was embarked on by the local county authority.

Sawmadal noted that the project is currently at a standstill because the county has no money to complete the project.

“We have erected up to 17 cement poles but there is no money to complete the project that is why the other poles are yet to be completed,” Sawmadal stated. The project to install light poles is currently at a standstill because the county has no money to complete it. Photo: Eric Doue

“During the County Council Sitting, we allocated US$15,000 for the project, which was approved by the citizens, but up till now, we have not been able to access the County Social Development Funds,” she added.

Sawmadal further explained that government buildings in Cestos are without electricity, except for the St. Francis Hospital, which runs a generator.

“It is challenging to work in this third world country without current, but this is the result of the county not being able to access its development funds,” she said.

She said when members of the United Nations Mission in Liberia were stationed in Cestos, they had electricity, which allowed the county government officials to be able to better do their jobs, including sending emails and using a photocopier.

â€œBut since they left, we have been finding it difficult,” Sawmadal said.

With barely a month until Independence Day, if nothing is done to solve the electricity problem in the county, that means the celebrations will be done in the dark.